An investment in tobacco, aimed at bringing gains to the country, has resulted in high costs and loss to both the government and the Lao people. In 2001, the Lao Government through a joint venture with Imperial Tobacco Group, formed the Lao Tobacco Ltd (LTL) and entered into a 25-year agreement skewed to benefit the tobacco business.

According to GlobalData, the LTL controls about 80% of the cigarette sales in Lao.[1] Imperial Tobacco Group, a UK-based company, has a controlling share of 53% of the joint-venture (JV) hence taking the profits out of the country and benefiting foreign shareholders.

Lao PDR’s tobacco tax law clearly states that the excise tax rate in 2022 should be 50% of the wholesale price applied to all tobacco products, including a specific tax of LAK 600 per pack. However, in reality, this law is not applied to LTL and makes the actual effective rate in Lao PDR the lowest tobacco excise tax rate (16-19.7% of retail price)[4] amongst all ASEAN countries.

According to the Southeast Asia Tobacco Control Alliance, the immediate impact from this tax rate is twofold – fiscal impact and an impact on public health.

About, 6,700 Laotians die from tobacco related diseases every year.[5] Health care costs from tobacco-related diseases is about 3.5 trillion LAK or 2.3% of GDP in 2017.[6] The loss from low excise rate, to the tune of LAK 1,429 billion (USD 142.9 million), could have paid for education, universal health coverage and infrastructure projects for the people of Lao PDR.

Instead, the government is expected to shoulder the healthcare costs of tobacco related diseases as well as lost productivity from tobacco addiction. The main question is how can such huge losses be considered a good investment that generated enough revenue when the LTL continues to rob and exploit Lao PDR?

Moreover, the track record of the tobacco industry in Lao PDR seems to indicate it is above the law and undermines domestic regulations.

When the Lao government was developing the tobacco control legislation in 2009, the industry persuaded policy makers to back away from a parliamentary decision to apply pictorial warnings on cigarette packs, instead adopt ineffective text-only health warnings. Due to strong commitment and perseverance of the Ministry of Health, in May 2016, Pictorial Health Warnings (PHWs) Regulation was issued requiring all tobacco companies to print 75% health warnings on all cigarette packs. However, the LTL did not comply with the law.

Lao PDR ratified the WHO Framework Convention on Tobacco Control on 6 September 2006. Since then, the country has enforced domestic legislation, such as the National Tobacco Control Law, which gave government agencies the right to manage, monitor and inspect the production, importation, distribution and sales of tobacco products and establish smoke-free areas. These instruments are the most effective investments the government has implemented to protect the health of Lao’s population.

Although foreign investment and trade may bring growth, such as more manufacturing and employment and a stronger economy to the country, but not all business deals benefit the people or the government. A deeper analysis of this 25-year deal with Imperial has shown net losses for the Lao people.

As smoking prevalence declines in high income countries, tobacco companies are known to exploit low and middle income countries to grow their markets and profits from selling more tobacco.

The important question is whether Lao PDR wants to continue being trapped in an unfair agreement that has enabled a rich transnational tobacco company to rob the nation’s people of their health and dealt a big loss in revenue? 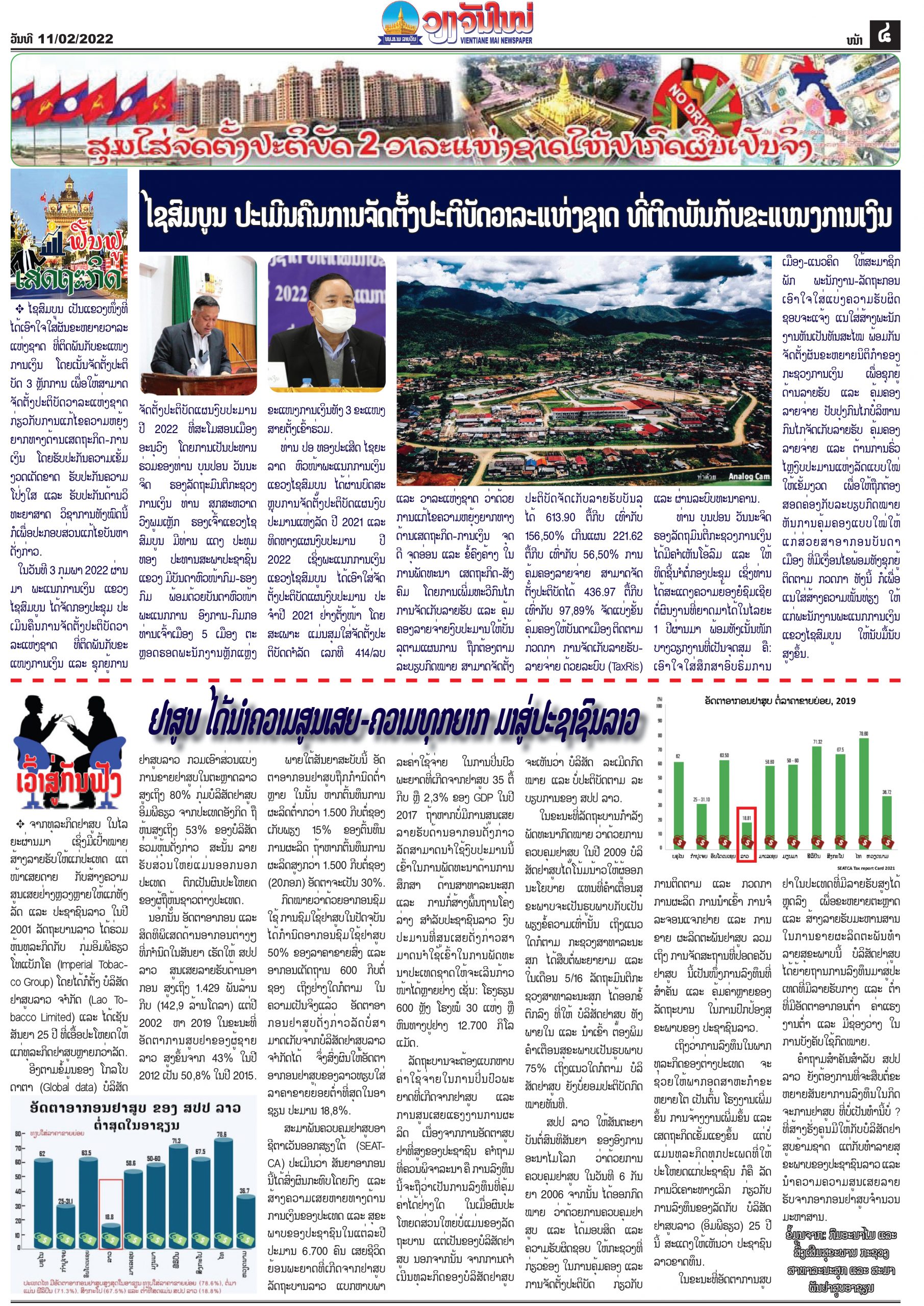