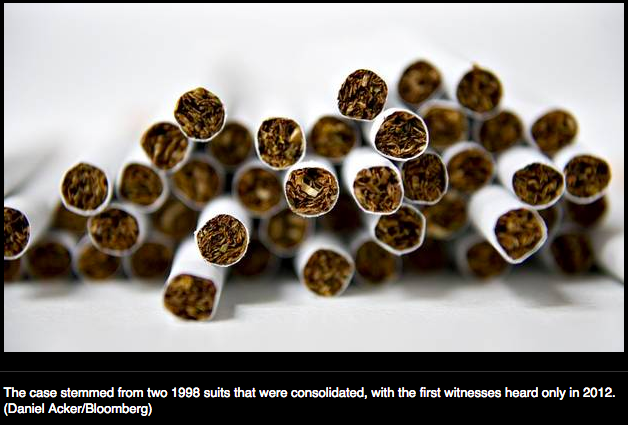 The countrys largest tobacco firms say they dont have the necessary cash to make a $1-billion payment by the end of the month to Quebec smokers who won a landmark class-action suit.

Lawyers argued in court Thursday that a provision in the $15.6-billion judgment obliging the companies to provide an initial compensation of $1.13-billion within 60 days of the ruling should be overturned.

The payment is due July 26.

All three companies have appealed the decision that saw a Quebec judge rule that Imperial Tobacco, Rothmans, Benson & Hedges and JTI-Macdonald must fork over $15.6-billion to smokers who either fell ill or couldnt quit the habit.

On Thursday, lawyers for all three firms told a Quebec Court of Appeal hearing they simply dont have the funds to cover the $1.13-billion payment, which they argued could cause irreparable harm to their ability to appeal and even put them on the brink of bankruptcy.

They argued Superior Court Justice Brian Riordan, the trial judge, erred in granting the provisionary sum and that the amount would not be recoverable if they eventually won on appeal.

But lawyers for the plaintiffs said the tobacco companies are bluffing and are very capable of finding the necessary money from their parent companies based outside Canada or from elsewhere.

One lawyer noted the tobacco firms havent put aside any money for the Canadian legal case, despite having 17 years to do so.

The case stemmed from two 1998 suits that were consolidated, with the first witnesses heard only in 2012.

Cecilia Letourneau filed on behalf of the provinces smokers who were addicted to nicotine and remained addicted or who died without quitting 918,218 people.

The other was filed by the late Jean-Yves Blais and sought compensatory and punitive damages for smokers whod suffered from cancer in their lungs, larynx or throat, or emphysema. That group was comprised of 99,957 people.

For the plaintiffs under Blais, an expert testified at the trial that 85 per cent would be dead within five years.

The provisional amount is to ensure those people or their estates are able to benefit.

These people are dying, theyre dying every day, said lawyer Gordon Kugler. Arent they entitled to a small portion of the judgment that took 17 years to come about?

The lawsuit is believed to be the biggest class-action ever seen in Canada, and lawyers have acknowledged appeals could take several years and end up in the Supreme Court of Canada likely.

In ordering the three firms to split the $15.6-billion as follows: 67 per cent to Imperial Tobacco ($10.5-billion), 20 per cent to Rothmans, Benson & Hedges ($3.1-billion) and 13 per cent to JTI-Macdonald ($2-billion), Riordan wrote that they chose profits over peoples health.

The three appeals court justices will render a decision at a later date.