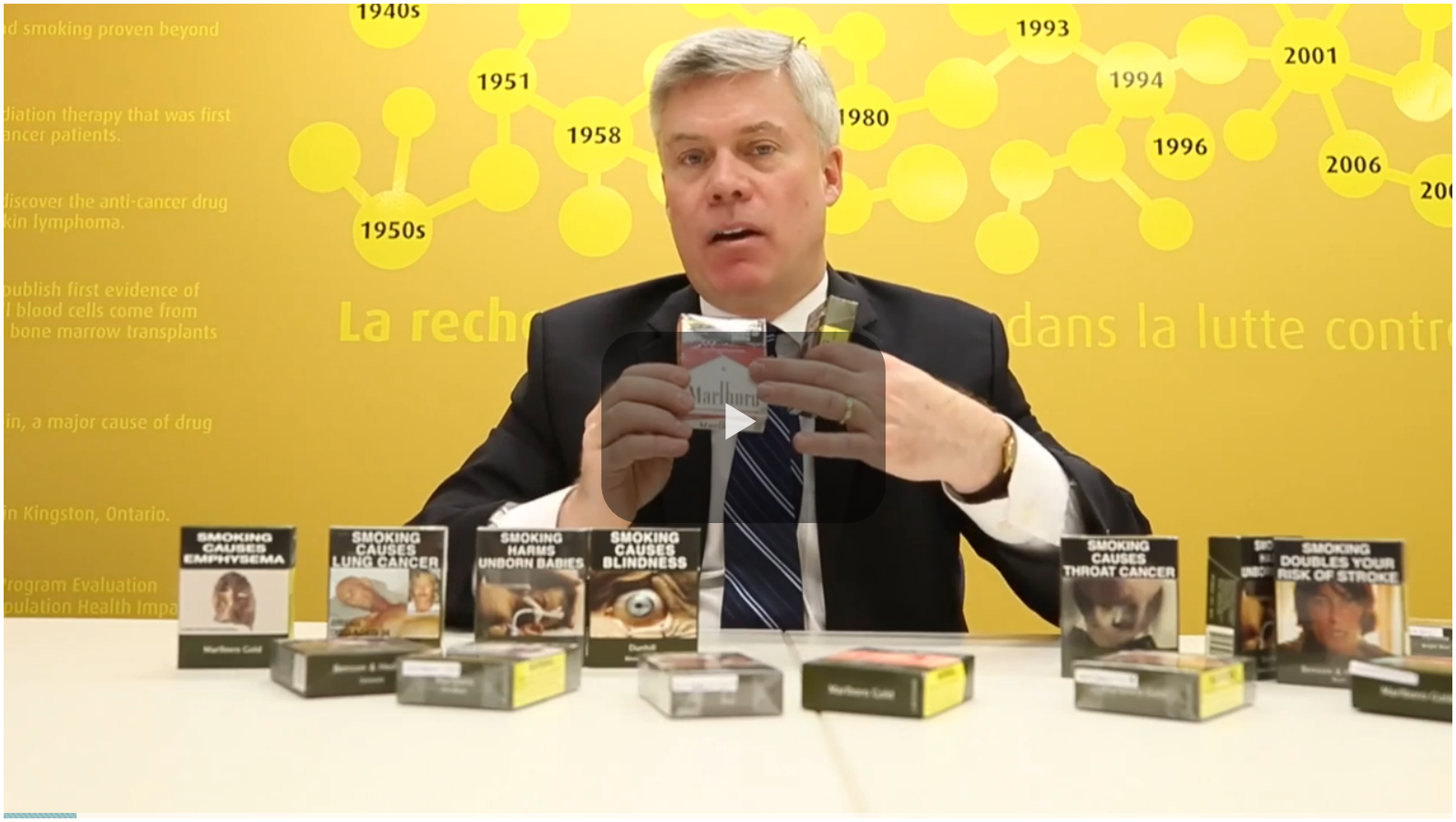 The federal government plans to force tobacco companies to sell their cigarettes in packages that lack distinctive brand designs aimed at enticing smokers to buy their product.

Prime Minister Justin Trudeau signalled in the mandate letter he recently delivered to Health Minister Jane Philpott that he wants the initiative to be one of her “top priorities.”

The measure, promised by the Liberals in last fall’s election, is being applauded by the Canadian Cancer Society, which says tobacco companies currently use their cigarette packs as “mini billboards.” The cancer society says plain packaging is an “important and logical step to curb tobacco marketing, reduce smoking and save lives.”

The term “plain packaging” is used because, under the initiative, the colours surrounding the name of the brand will all be the same. But the packages will also likely still carry vivid, government-mandated anti-smoking messages.

A spokesman for the cigarette company said Tuesday that current packages don’t influence someone’s decision to start smoking – noting that 75 per cent of a cigarette pack is already filled with health warnings and the product itself is not on display at stores.

The coming restrictions are part of a global trend. Australia introduced plain packaging in 2012 and similar rules take effect in May in Ireland, the United Kingdom and France.

There is no indication yet how quickly the government will move, although it’s expected that once the changes are formalized, either through regulation or legislation, the industry could face a transition period of perhaps a year before it must comply.

In his mandate letter to the health minister, Trudeau wrote that he expects her to “introduce plain packaging requirements for tobacco products, similar to those in Australia and the United Kingdom.”

With those countries as a model, it’s expected Canadian cigarettes will be sold in packages that are uniform in size, shape and design. The brand name will still appear on the package but will likely be placed on top of a drab colour that is consistent for all packs. The package would continue to feature large, sometimes gruesome, health warnings.

In an interview after taking the portfolio, Philpott, a physician from Toronto, said, “We will obviously make sure that we work with partners, all of the stakeholders.

“But there is strong evidence that that will help to decrease smoking rates. And it’s widely known, of course, the tremendous health risks associated with smoking.”

“We should not have the package as a mini-billboard that walks around homes and schoolyards and communities promoting tobacco.”

He said Australia’s plain packaging would be a good model for Canada. “You would no longer have tobacco company logos and graphics and colours. In the case of Australia, they have a drab brown for all brands.”

Cunningham said that in recent decades, smoking rates have dropped from 50 per cent of Canadians 15 and older in 1965, to 18 per cent of those aged 12 and above today.

“We’ve had progress in reducing smoking. But there are still more than five million Canadians who smoke. There are still kids who start every day and that’s unacceptable.”

“Government, in order to introduce legislation, needs to make sure it has a positive impact,” he said.

“We need a common sense approach to this. Nobody starts to smoke because of the packages.”

“There’s already a 75-per-cent health warning on the packs. All the packs are hidden from public view. So plain packaging is not going to provide further information to consumers who are already aware of the health risk associated with smoking.”

Gagnon said the industry is only trying to “increase our share” of those people who have already “made the choice of smoking.”

He said peer pressure and the smoking habits of their friends and family are what makes most young people start to smoke – not packages.

“Kids should not smoke,” said Gagnon. “There’s harm related to tobacco products. It should be consumed by adults that have made a conscious decision of smoking.”

He declined to say if the industry will launch a legal action against the government.

“Obviously, there are intellectual property issues with preventing any company to use their trademarks.

“I don’t think that any other industry in the world would accept that the government takes over their brands … But I’m not going to speculate on the next steps at this point in time.”