The first ever global index to track tobacco industry influence over public health policy has revealed that the UK is a world leader in efforts to curtail undue meddling.

According to the report, published by the industry watchdog Stop (Stopping Tobacco Organizations and Products), the UK, Uganda, Iran and Kenya are the most successful at “resisting industry interference” in government.

But Japan, Jordan, Egypt and Bangladesh have “succumbed” and have the highest levels of tobacco industry influence of the 33 countries tracked, the report claims.

The index ranks governments across the globe on a scale of zero to 100 on seven key areas, including transparency, the tobacco industry’s level of participation in policy development and the number of government measures in place to prevent meddling.

Lower scores represent lower overall levels of interference – the UK scores 26, while Japan comes in highest with 88. The US is also among the worst 10 countries, scoring 72.

The report comes just months after a study from the World Health Organization found that many countries are lagging behind in efforts to end the “tobacco epidemic” – in 2017 there were 1.4 billion smokers over the age of 15 globally, only a slight decline from the 1.46 billion in 2007.

This slow progress is largely because tobacco industry influence over government policy is hampering global efforts to stamp out smoking, the WHO warned.

“The tobacco industry pushes the boundaries and will continue to undermine and thwart tobacco control efforts,” said Dr. Mary Assunta, lead author of the Stop report and head of global research and advocacy at the Global Center for Good Governance in Tobacco Control.

“The key is entirely in the hands of governments, who need to implement protection policies,” she said. “They have to show political will and introduce concrete measures to curb influence.”

Dr. Assunta added that the single most effective intervention against undue meddling is to “strictly” limit interactions between civil servants and the tobacco industry, so that they only communicate when governments need “to control, to regulate or to supervise”.

She said this was the opposite of the current situation in Japan, where the government owns about a third of the company Japan Tobacco.

“So there is a conflict – one arm [of government] is looking to promote the tobacco business, while the health arm is looking to limit tobacco use,” Dr. Assunta said. “When there is a clash of these two [interests], it seems the economic side is ahead.”

In the new interference index, Stop found that “wooing” of senior government officials was “rampant across regions”, with tobacco companies aggressively targeting departments of finance, commerce and trade to lobby for influence over government policy.

It accuses the industry of using donations and awards to obtain endorsement from senior officials. 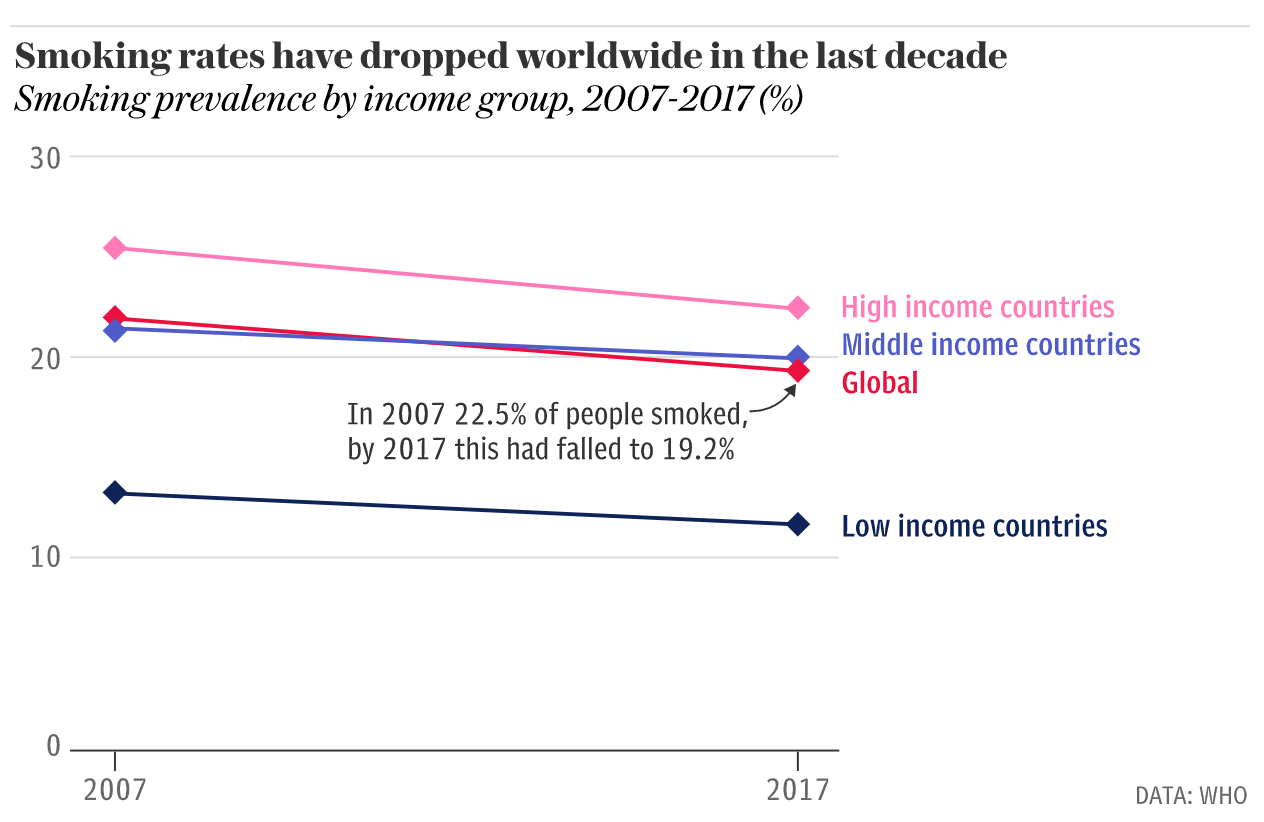 The report also warns against the “new threat” of e-cigarettes, suggesting that there is growing evidence that the industry is using them as a justification to interact with government officials and open the door to new products.

It noted that in 2018, tobacco companies lobbied to make it easier for them to sell or promote e-cigarettes in the US, Philippines, Mexico, Lebanon and Turkey.

Overall, the index found that countries were better able to limit influence when government officials were open about their dealings with industry lobbyists.

For instance, the UK was among nine countries praised for banning political contributions and gifts from tobacco companies.

But although Britain topped the index, experts warn that the country still has a way to go to entirely curtail interference.

“The index shows that the UK is an international leader in resisting the unremitting attempts of the tobacco industry to influence policy,” said Dr Mateusz Zatoński from the tobacco control research group at the University of Bath. “This in turn explains why the UK is routinely ranked as having the most robust tobacco control policies in Europe.

“At the same time the index shows that the UK still has a long way to go.

“There is no effective lobbying register, meetings between government representatives or Foreign and Commonwealth Office officials and the industry are not always transparent, and some parliamentarians and political parties continue to engage with the tobacco industry.

“The index should serve as a road-map to eliminate these gaps,” Dr Zatoński said.

Sandra Mullin, senior vice president at Vital Strategies and board chair of Stop, added: “Our report suggests that even these countries [successfully limiting interference] need to be vigilant against new industry tactics.