Implementation of Article 5.3 of the WHO Framework Convention on Tobacco Control in Asian Countries, 2020

Implementation of Article 5.3 of the WHO Framework Convention on Tobacco Control in ASEAN Countries, 2020

Global Tobacco Industry Interference Index 2020 PDF 1.2mb
A global survey on how governments are responding to tobacco industry interference and protecting their public health policies from commercial and vested interests as required under the World Health Organization Framework Convention on Tobacco Control

Uncovers the poor quality of data used by Oxford Economics (OE), identifies multiple deficiencies in OE’s study methodology, and exposes the deceptive presentation of the study results to provide distorted illicit tobacco data in Asia and attempt to promote tobacco as essential products.

Tobacco industry (TI) interference has been identified to be the largest barrier and the greatest threat to the implementation of the WHO Framework Convention on Tobacco Control (FCTC) worldwide. Article 5.3 of the treaty cautions Parties against TI interference and provides guidelines on measures to protect their public health policies. While Article 5.3 has overall been a challenge to implement, it is even more so for Parties that have State-owned tobacco monopolies or joint ventures with tobacco companies.  This report documents the experiences of the People’s Republic of China, Viet Nam, Lao PDR and Thailand that have State-owned tobacco enterprises of varying sizes and operations, and how these have impacted FCTC implementation.

A Snapshot of the Tobacco Industry in the ASEAN Region
PDF 1.4mb
This report released in 2019 details the scare tactics used by the tobacco industry to intimidate governments and fight stringent tobacco control measures, falsely claiming that such measures will cause job loses, kill the industry, and harm government investments. In reality, regardless of the strength of tobacco regulations, the tobacco business is flourishing in the ASEAN region spurring transnational tobacco companies (TTCs), in recent years, to acquire or form joint ventures with local companies to benefit from the lucrative tobacco business and reap bigger profits.

This first Asian Tobacco Industry Interference Index provides an overview of how 14 countries are faring in implementing the WHO Framework Convention on Tobacco Control (FCTC) Article 5.3 guidelines. The Index is based on publicly available evidence to support choice of scores. Overall findings indicate that most countries are moving at a glacial pace in implementing Article 5.3. While some countries have made progress in reducing interference from the industry, others have remained stagnant or regressed. There still remains much room for improvement in Asia in the implementation of Article 5.3 guidelines. The Index aims to generate discussion and facilitate action to counter tobacco industry interference that undermines and delays tobacco control efforts at the country level.

Transnational tobacco companies are marketing ‘new generation products’ called heated tobacco products (HTP), which are sticks of compressed processed tobacco intended for heating to a high temperature without causing combustion. When used by a consumer, they generate an inhalable aerosol that contains nicotine and other chemicals. Although these products are not harmless, they are promoted as a less harmful choice compared to traditional cigarettes.

This document makes the case for why tobacco control policies, particularly those aimed at protecting public health policymaking from the tobacco industry are, in reality, good governance policies geared towards fighting corruption. It is intended for advocates and governments around the world to give them additional tools to be able to implement the life-saving measures enshrined in the global tobacco treaty, formally known as the WHO Framework Convention on Tobacco Control (FCTC).

Hijacking ‘Sustainability’ from the SDGs: Review of Tobacco-Related CSR activities in the ASEAN Region PDF 2.7mb

The UN Sustainable Development Goals (SDGs) of the 2030 Agenda for Sustainable Development adopted by world leaders in September 2015 requires governments to mobilize efforts and partner with different stakeholders to end all forms of poverty, fight inequalities and tackle climate change while ensuring that no one is left behind. The Tobacco industry (TI) takes advantage of the SDGs to reach customers through the so-called Corporate Social Responsibility (CSR). The industry claims that CSR activities are implemented in accordance with the SDGs while its business is in conflict with almost all the SDGs.

The report provides comprehensive information about the tobacco industry’s tactics in utilizing the SDGs as a license to damage health and life of people, hijack sustainable development policies and undermine public health policies in the region. It also discussed on TI’s investment under the name of charitable contributions and new tactics of TI to reach children and young people.

A snapshot of the tobacco industry in the ASEAN region PDF 2.4mb
This snapshot provides quick facts on the main tobacco companies operating in the region. The world’s top three companies have a strong presence. Cigarette sales in ASEAN countries are set to increase between 2015 and 2020 in almost all the countries.

Tobacco Industry and Front Groups Pump Up Their PropagandaPDF 269kb

“This report show how much the tobacco industry spends on CSR activities and how this pales in comparison to the industry’s earmings and the CEOs’  pays.”

This toolkit presents a range of issues, policy options, and considerations that each country needs to take into account when implementing Article 5.3 of the World Health Organization Framework Convention on Tobacco Control (WHO FCTC). It describes guiding principles, common practices and motives used by tobacco industry in interference; steps for effective Article 5.3 implementation as well as illustrates recommendations for implementing Article 5.3 and some policy templates are included. The global action against the tobacco industry is also presented.

Tobacco companies continue to conduct fake CSR as a tactic to undermine the ban on tobacco advertising, promotions and sponsorship. To circumvent the ban, they use their own foundations to fund and advertise these activities. This report provides the latest information on which organisations in the ASEAN region the top 4 tobacco companies have targeted to front their so-called charities.

Elimination of illicit trade is an important component of global tobacco control. This has been recognized at the Fifth Meeting of the Conference of Parties to the FCTC when Parties adopted the Protocol to Eliminate Illicit Trade in Tobacco Products to prevent the undermining effect that illicit trade has on price and tax measures, health objectives, and the economy.This paper examines the implementation of key measures to control the supply chain and help in eliminating illicit trade in tobacco products in the ASEAN region, specifically, 1) Excise tax stamps 2) Tracing and tracing technologies, and 3) Licensing systems

The U.S. Chamber of Commerce, having close ties to the tobacco industry, has been actively derailing tobacco control regulations and undermining life-saving policies in dozens of countries around the world, according to a new report released by a coalition of public interest and health groups. The report, Blowing Smoke for Big Tobacco, details how the U.S. Chamber of Commerce (U.S. Chamber) has helped the tobacco industry fight tobacco control policies in many countries, including in Asia, undermining measures intended to combat a global tobacco epidemic that remains the number one preventable cause of death.

The public service department of a country has a big role to play in implementing the global tobacco treaty, the WHO FCTC. This document describes how one Southeast Asian Government, the Philippines, has applied the WHO FCTC Article 5.3 guidelines in protecting its bureaucracy from undue influence from the tobacco industry through a Joint Memorandum Circular between the Civil Service Commission and the Department of Health. It is one of a kind and serves as an example of best practice for the region.” 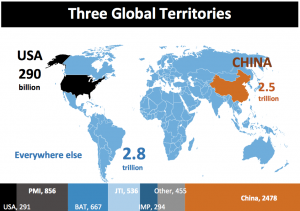 This is a critique of a Philip Morris International funded study on illicit tobacco trade,The Asia-11 Illicit Tobacco Indicator 2012, conducted by the International Tax and Investment Center (ITIC) and Oxford Economics (OE) released in September 2013.

This Asia-11 report, while claiming to be done by independent researchers, was prepared according to terms of reference provided by Philip Morris Asia Ltd, while the ITIC itself is funded by the major transnational tobacco companies. The main conclusions of the report echo the assertions of tobacco companies, such as countries with high taxes on tobacco also had the highest volumes of illicit cigarettes.

The Southeast Asia Tobacco Control Alliance (SEATCA) has stamped Failed on a tobacco industry funded research on illicit trade of tobacco products in 14 Asian countries. The research, entitled Asia-14 Illicit Tobacco Indicator 2013 (Asia-14) was published by the International Tax and Investment Center (ITIC) and Oxford Economics (OE) last year. This is a follow up to their previous attempt to estimate the scope and composition of illicit tobacco consumption in Asia presented in Asia-11 Illicit Tobacco Indicator 2012 (Asia-11).

This primer makes the case for why tobacco control policies, particularly those geared towards protecting public health policymaking from the tobacco industry, are, in reality, good governance policies.

It is intended for advocates and governments around the world to give them additional tools to be able to implement the life-saving measures enshrined in the global tobacco treaty, formally known as the World Health Organization Framework Convention on Tobacco Control (FCTC).

The ISO 26000: Guidance on Social Responsibility is the most comprehensive standard related to social responsibility. However, current practices of TI fail in all principles of ISO 26000, making it impossible to be considered as socially responsible industry.

This report provides details how TI-CSR fails in all principles and core subjects of ISO 26000 as well as recommendations to stop TI-CSR.

Tobacco companies are increasingly resorting to corporate social responsiblity (CSR) activities to continue their promotion to buy goodwill and credibility to earn political mileage. CSR is a form of sponsorship, which amount to promotion hence should be prohibited. CSR must be address as part of denormalisating the tobacco industry.

Imperial Tobacco, world’s 4th largest transnational tobacco company, sold 294 billon sticks globally in 2014, and its net revenue was US$3.2 billion. Its growth brands increased by 7%. The company plans to increase tobacco sales even more globally, especially in several targeted markets.In the ASEAN region it will be targeting Cambodia, Lao PDR and Vietnam.

The company plans to increase sales through strategies such as new pack designs and pricing measures. Imperial has classified Cambodia and Vietnam as “among the world’s leading emerging markets”. In Lao PDR, Imperial already has a monopoly of the market controlling over 90 percent of market share.  The table below shows clearly why Imperial is targeting these three ASEAN countries – stick sales are increasing every year and the tobacco industry is assured of profits.

The WHO FCTC Article 5.3 is vital in protecting tobacco control policy from interference of the tobacco industry. It is the backbone of the FCTC because the treaty cannot succeed if tobacco industry interference is not rooted out. In order to give Article 5.3 more teeth and clarity, the Parties to the FCTC unanimously adopted guidelines for this article to encourage governments to establish, among other safeguards, measures that limit tobacco industry interactions with government activities, and to put in place public disclosure measures.