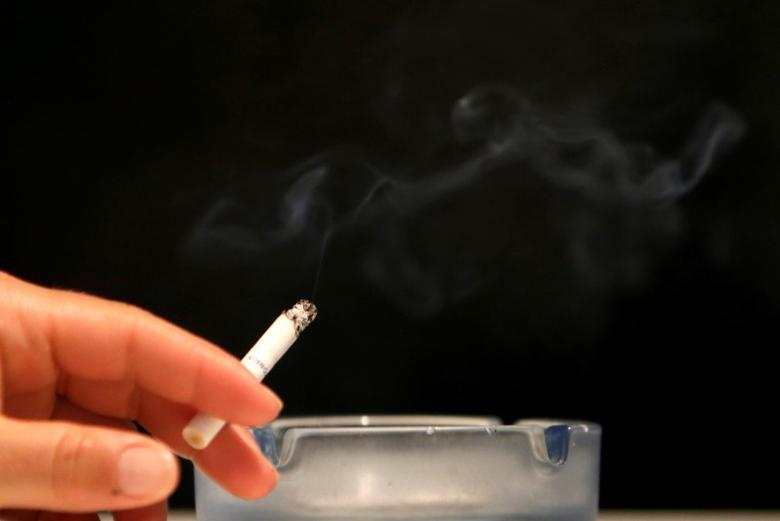 A customer smokes a cigarette in a cafe in Prague, Czech Republic, May 25, 2016. REUTERS/David W Cerny/File Photo

A global tobacco treaty put in place in 2005 has helped reduce smoking rates by 2.5 percent worldwide in 10 years, researchers said on Tuesday, but use of deadly tobacco products could be cut even further with more work on anti-smoking policies.

In a study published in the Lancet Public Health journal, researchers from Canada’s University of Waterloo and the World Health Organization (WHO) found that while progress against what they called the “global tobacco epidemic” has been substantial, it has still fallen short of the pace called for by the treaty.

The WHO Framework Convention on Tobacco Control (FCTC), which came into effect in 2005, obliges the 180 countries signed up to have high tobacco taxes, smoke-free public spaces, warning labels, comprehensive advertising bans and support for stop-smoking services.

Smoking causes lung cancer and is a major risk factor for cardiovascular illnesses such as heart disease and strokes, which kill more people than any other diseases.

The WHO says tobacco kills about six million people a year globally and imposes a huge burden on the world economy. Annual healthcare and lost productivity costs for those made ill from smoking are estimated at around $1 trillion.

The study analyzed WHO data from 126 countries – 116 of which are signatories to the FCTC – and tracked and compared the implementation of the five key measures from 2007 to 2014 to look at links between strong policies and smoking rates.

It found that, on average, smoking rates dropped to 22.2 percent in 2015 from 24.7 a decade earlier. But the trends varied, with rates falling in 90 countries, rising in 24 and remaining steady in 12.

Countries that fully implemented more FCTC measures saw significantly greater reductions in smoking rates, the study found. Overall, each additional measure was linked with a drop in smoking rates of 1.57 percentage points – corresponding to 7.1 percent fewer smokers in 2015 compared with in 2005.

The study was not a full global analysis, since only 65 percent of countries had the data needed, but it did include countries from all income levels and regions. The researchers also noted that the lower smoking rates could be influenced by factors other than FCTC policy recommendations.

“The data did not allow a detailed analysis of the impact of individual policies,” said Geoffrey Fong of Waterloo University, who co-led the work.

He called for more studies that are specifically designed to evaluate the impact of all FCTC policies and would “help provide guidance to countries about what policies may offer the greatest benefits”.