Tokyo earned $1 million from an official Olympics-branded cigarette the last time it hosted the competition. Half a century on, Governor Yoichi Masuzoe is looking to restrict smoking before the 2020 Summer Games.

“I want to do this,” Masuzoe said on a Fuji TV show this week when asked about the possibility of introducing stricter curbs. “If I get cooperation from the Tokyo Assembly, we can pass an ordinance.” 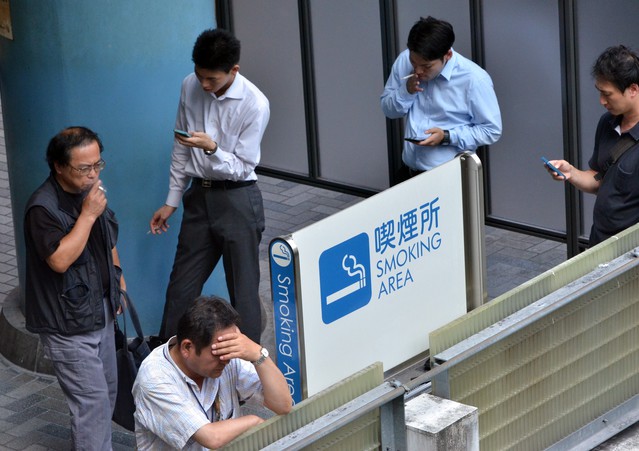 The proportion of smokers in Japan fell to about 20 percent in 2014 according to Japan Tobacco Inc. (2914), from 47 percent in 1965, the year after Tokyo first hosted the Olympics. Yet even as secondhand smoke kills nearly 7,000 people in the country a year, there’s no penalty for breaking current Tokyo guidelines on preventing passive smoking.

VIDEO: Tokyo Olympics Could Be Smoke-Free

The International Olympic Committee adopted a smoke-free policy before the 1988 Winter Games in Calgary, adding pressure on cities to curtail tobacco use. In the U.K., the last country to host the Summer Games, smoking in bars and restaurants has been banned since 2007. Russia, host of this year’s Winter Games, introduced fines for smoking in locations such as eateries. The U.S. restricts smoking on a state-by-state basis, with New York having barred people from lighting up in public places since 2003.

Any effort to curb smoking may face resistance from Japan Tobacco Inc. The company was a state monopoly until 1985 and the Finance Ministry remains the largest shareholder. Revenues from tobacco taxes are forecast by the ministry to amount to 922 billion yen ($8.9 billion) in the fiscal year ending March 2015, compared with total tax revenue of 50 trillion yen.

Yoichi Takahashi, a former Finance Ministry official who is now a professor at Kaetsu University in Tokyo, blames the close ties between the tobacco industry and the government for the slow pace of Japan’s smoking clampdown.

“Keeping the shares in Japan Tobacco allows bureaucrats to secure post-retirement positions for themselves,” he said.

Yasutake Tango, who served as the top bureaucrat at the ministry, was appointed chairman of JT in June this year. The company said in an e-mail it was unable to comment on the reasons for government ownership of its shares.

“While JTI supports regulation of smoking in many public places, we do not believe that laws prohibiting smoking in all workplaces and places open to the public are the solution,” JT’s international arm said in a statement on its website that is unrelated to the Tokyo smoking debate.

VIDEO: Could a Smoke-Free Olympics Be on the Horizon?

In Tokyo, the smoking curbs that are enforced in parts of city are mainly applied outdoors to prevent brush-by burns and littering, forcing people drinking outside bars such as Stand T near Tokyo Station to go inside to spark up. In contrast, prohibition in establishments in many parts of Europe and North America produces the common sight of smokers congregating on sidewalks.

Masuzoe’s comments follow the lead of foreign-branded food industry giants. McDonald’s Corp’s Japan business banned smoking from this month in every one of its 3,135 outlets nationwide. Starbucks Coffee Japan Ltd. has maintained a smoking ban — as it does in the U.S. — in all its shops since opening its first in central Tokyo’s Ginza district in 1996.

“Promoting the health of all the people in the world is one of the major aims of the Olympics and Paralympics,” Masuzoe told reporters today. “I think it’s important to properly prevent passive smoking in the run-up to 2020,” he added.

Manabu Sakuta, a Tokyo-based neurologist who has headed the Japan Society for Tobacco Control for almost a decade, said 2020 will spark broader changes in smoking regulations.

“This is an international duty,” Sakuta said in a phone interview. “It can’t be avoided.”

His group is among those, including the Japan Medical Association, seeking to meet with Masuzoe and separately with Prime Minister Shinzo Abe to press their case for enforcing a ban on smoking in restaurants and similar public spaces before the Olympics. About 6,800 Japanese a year are estimated to die from the effects of passive smoking, the National Cancer Center said in 2010.

Tokyo guidelines banned smoking “in principle” in public facilities in 2011 without specifying penalties and allowing exemptions for cases where smokers can be kept separated from non-smokers. A survey by the city government last year of 4,000 establishments found 21.3 percent banned smoking, 21.1 percent had separate smoking areas and 36.7 percent of respondents said they did not want legal regulation of smoking.

Japan doesn’t have the graphic anti-smoking commercials or packaging rules that are common in other advanced nations.

Any move to ban smoking in cafes, bars or restaurants would likely face resistance from smokers and many owners of such establishments.

“I love smoking,” Masao Aso, a 49-year-old worker in the auto industry, said during a cigarette break in a smoking area of a central Tokyo office building. “I want them to put aside some space for us, however small it may be. I don’t want to cause trouble for anyone else.”

Lawmaker Shigefumi Matsuzawa, who clamped down on smoking while serving as governor of Kanagawa prefecture, adjacent to Tokyo, is set to establish a cross-party lawmakers’ group in November to submit legislation on passive smoking before the Olympics.

“It has been proven that not only smoking but passive smoking is a cause of death, illness and harm, but Japan has been slow to tackle this,” Matsuzawa’s group said in a founding declaration issued in June. “In order to make the Tokyo Olympics and Paralympics a success, Japan needs a law preventing passive smoking.”

To contact the editors responsible for this story: Andrew Davis at abdavis@bloomberg.net