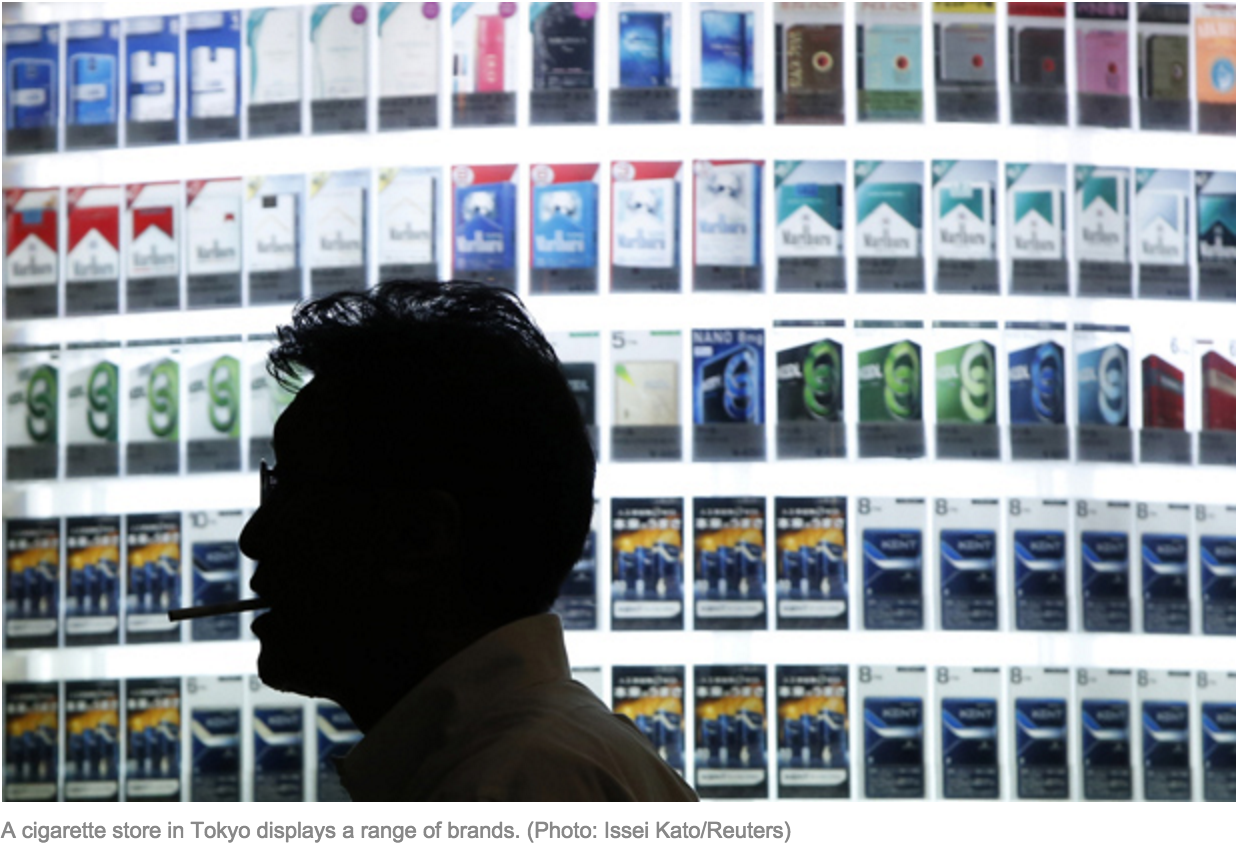 This week, the United States and eleven other countries signed the Trans-Pacific Partnership (TPP), a regional trade deal that is thecenterpiece of U.S. international economic policy and President Obama’s pivot toward Asia. Now the deal goes to Congress for approval, where opposition is rising. One hot topic in the congressional debate isn’t about what the TPP includes, but what it excludes. The TPP is the first U.S. trade deal to exempt antismoking measures from the lawsuits that investors may bring under the agreement.

Tobacco companies, business groups, and Republican lawmakers oppose this carve-out, arguing it undermines the investor-state dispute settlement (ISDS) system and will lead to health exceptions in future trade deals for other consumer goods such as alcohol and sugar.

Trade critics and Democrats welcome the carve-out for tobacco control measures but argue the need for that exception underscores the threat that investor-state disputes pose to other public health and environmental regulations, which aren’t carved out.

If protection for antismoking rules seems like small beer in the decision to approve a twelve-country trade deal that took eight years to negotiate, that’s because it is. The U.S. cigarette industry long ago shifted most of its manufacturing (and the associated jobs) overseas, and agricultural tobacco production is not included in the TPP carve-out. But if construed as an issue about ISDS generally, the stakes become higher. The margins for approving trade deals in Congress are razor thin.

To move the TPP closer to congressional passage, President Barack Obama’s administration need not reopen the trade talks to eliminate the carve-out for tobacco or extend it to other areas. But the White House must do a better job addressing the misperceptions that have arisen about the extraordinary nature of the tobacco carve-out and its implications for the potential threat that investment disputes may still pose for other health and environmental regulations.

Exceptions Are the Rule in Trade Agreements

Readers might understandably conclude from the controversy over the tobacco carve-out that exceptions are, well, exceptional in the TPP. The opposite is true.

The number of exceptions in U.S. trade agreements has increased over the last two decades and is a reason for the expanding length of these deals. For all the attention given to the 1994 North American Free Trade Agreement (NAFTA), it is fewer than four hundred pages. This proliferation of exceptions is seen in European Union and Canadian trade deals, as well.

These changes reflect the expanding aims of trade liberalization. The traditional barriers to international commerce—tariffs and quotas—have declined dramatically over the last several decades. As a result, governments seeking freer trade have shifted their focus to other areas like investment, services, procurement rules, regulatory cooperation, and intellectual property. But as governments have sought deeper cooperation, they have also tried to preserve space for existing legal commitments, retain regulatory independence, and reassure trade-wary constituents. Exceptions are the direct result of this careful balancing act.

In many cases, the exceptions reflect the particular subject matter excluded rather than any trade-specific concerns. Most trade deals exclude national security and tax rules. Some exclude firearms and munitions. The TPP exempts from dispute settlement any matters related to the Treaty of Waitangi, a treaty between the UK and New Zealand’s Maori chiefs. Compulsory licenses, which often involve pharmaceutical patents, are the subject of a World Trade Organization declaration and exempted from the expropriation claims that investors may bring under the TPP.

Why Tobacco Is Different

The tobacco carve-out is similar to the other exceptions in the TPP. It reflects the particular status of tobacco in international law and established U.S. trade policy, and was negotiated and included at the insistence of TPP member countries.

One hundred and eighty countries have ratified the Framework Convention on Tobacco Control (FCTC), making it one of the most widely subscribed treaties in the world.

Why should tobacco be different from any other product in U.S. trade? To start, tobacco is the only legal consumer good that has a binding international treaty dedicated to its control and prevention. One hundred and eighty countries have ratified the Framework Convention on Tobacco Control (FCTC), making it one of the most widely subscribed treaties in the world. This convention entered into force in 2005 and, like nearly all treaties concluded since that time, the U.S. Congress has yet to ratify it. The United States has signed the convention, however, and is fully compliant with its terms and participates in its meetings. All eleven of the other TPP countries have ratified and are legally bound to adopt the measures prescribed by the convention. The tobacco control measures carved out in the TPP match the measures mandated in the FCTC and its implementation guidelines.

Tobacco is also the only legal consumer product with a binding U.S. executive order, signed in 2001 and still in force, prohibiting U.S. executive branch agencies from promoting its sale or export. That order states that U.S. trade initiatives cannot be used to restrictgovernments’ tobacco marketing and advertising regulations, unless those regulations unfairly favor domestic tobacco products. This executive order, issued pursuant to the President’s constitutional authority to conduct foreign affairs, operates with the full force of U.S. law.

The need to ensure that trade and investment disputes do not interfere with the tobacco control measures mandated in international law and protected in established U.S. trade policy arose with a recent shift in tobacco industry tactics. In 2010, Philip Morris International, a Swiss corporation, began filing investment cases to block cigarette labeling and advertising laws. Cases were filed against Australia, Norway, and Uruguay and threatened against poorer nations including Togo, Namibia, and the Solomon Islands. The cases generated millions of dollars in legal costs for defending governments and delayed implementation of public health laws. Uruguay would have had to drop its law had Michael Bloomberg, the former mayor of New York, not read about the case and funded its defense.

The Philip Morris lawsuits sparked widespread outcry. Tobacco use is one of the world’s leading causes of death, killing nearly twice as many people annually than HIV/AIDS, malaria, and tuberculosis combined. Most of those deaths occur in poorer countries, where tobacco consumption is still growing. Malaysia, a country in the TPP talks, demanded that tobacco be excluded from the deal entirely. The parties to the TPP settled instead on the tobacco carve-out. It enables TPP members that wish to adopt tobacco controls pursuant to the FCTC to do so without the looming threat of investment disputes. But the carve-out does not exclude tobacco farmers, who are not the target of the FCTC, from the benefits of the TPP.

The Broader Implications for Investment Disputes Under the TPP

The Obama Administration has done itself a disservice by not making the basis for the tobacco carve-out clearer. It has allowed cigarette companies to mobilize opposition by characterizing the carve-out as a campaign against ISDS that will eventually implicate products from other industries. It has also undermined the White House’s efforts to ease the public’s concerns with ISDS, which do not end with tobacco. The TPP specifically respects the legitimacy of environmental, health, and safety regulations and includes stricter limits on ISDS claims, but the value of these provisions are discounted by those citing the tobacco carve-out as proof the changes are not protective enough.

The TPP tobacco carve-out says a lot about the special role of tobacco in U.S. and international law, but less about investment disputes generally.

In the end, the TPP tobacco carve-out says a lot about the special role of tobacco in U.S. and international law, but less about investment disputes generally. It is an exception motivated by a unique combination: a widely subscribed treaty binding all other TPP countries, an executive order mandating U.S. trade policy, and a pattern of tobacco industry abuse in the face of a proven public health threat. It is a constellation of factors unlikely to reoccur in other health and environmental areas.

If the White House hopes to move the TPP toward congressional passage, it will need to make this argument much more forcefully. Otherwise, the TPP may have to wait to be part of the next president’s legacy, if it happens at all.