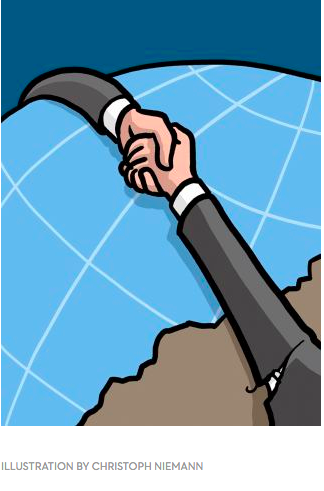 In2012, Australia implemented tough anti-tobacco regulations, requiring that all cigarettes be sold in plain, logo-free brown packages dominated by health warnings. Philip Morris Asia filed suit, claiming that this violated its intellectual-property rights and would damage its investments. The company sued Australia in domestic court and lost. But it had another card to play. In 1993, Australia had signed a free-trade agreement with Hong Kong, where Philip Morris Asia is based. That agreement included provisions protecting foreign investors from unfair treatment. So the company sued under that deal, claiming that the new law violated the investor-protection provisions. It asked for the regulations to be discontinued, and for billions in compensation.

The case has yet to be decided, but the concerns it raises help explain President Obamas embarrassing setback last week, when the House failed to give him fast-track authority over one of two big trade agreements that had been envisaged as a key part of his legacy. Both agreementsthe Trans-Pacific Partnership, with eleven Asian and Pacific countries, and an agreement with Europe called the Transatlantic Trade and Investment Partnershipinclude provisions very like the ones at the heart of Australias fight with Big Tobacco. Known as Investor-State Dispute Settlement (or I.S.D.S.) provisions, they typically allow foreign investors to sue governments when they feel they have not received fair or equitable treatment, and to have their cases heard not by a domestic court but by an international arbitration tribunal made up of three lawyers.

These provisions have been opposed by an unusual coalition of progressives and conservatives, who contend that they will let multinationals override government policy, and, as Senator Elizabeth Warren put it, undermine U.S. sovereignty. On the other side, the Obama Administration and business groups insist that this is just fear-mongering. They point out that I.S.D.S. provisions have been around for fifty years, that lawsuits under them are rare, and that companies typically dont win them. I.S.D.S., they argue, doesnt limit the ability of governments to regulate but gives foreign investors some redress if they get treated unfairly. That makes them more likely to invest in countries that dont have robust legal systems, which fuels economic growth. In the old days, aggrieved American investors would call on the Navy to protect their intereststhus the phrase gunboat diplomacy. How much better that now they just call their lawyers.

But these days signing such agreements is risky for countries. I.S.D.S. lawsuits used to be rare, but theyre becoming a growth industry. Nearly a hundred have been filed in the past two years, as against some five hundred in the quarter century before that. Investor protection, previously a sideshow in corporate law, is now a regular part of law-school curricula. Weve also seen an expansion in the types of claims that have been brought, Lise Johnson, the head of investment law and policy at the Columbia Center on Sustainable Investment, told me. I.S.D.S. was originally meant to protect investors against seizure of their assets by foreign governments. Now I.S.D.S. lawsuits go after things like cancelled licenses, unapproved permits, and unwelcome regulations.

This mission creep has been abetted by the fact that the language of I.S.D.S. provisions is often vague. Jason Yackee, a law professor at the University of Wisconsin who specializes in international-investment law, told me, The rights given to investors are so open-ended and ambiguous that they allow for a lot of creative lawyering. Canada lost a case where it had rejected, after an environmental study, a proposed mining and marine-terminal project. The country was also sued when Quebec imposed a moratorium on fracking. Germany is in the midst of a $4.7-billion lawsuit occasioned by its decision to phase out nuclear power. Uruguay is facing a lawsuit from Philip Morris International, much like the one brought against Australia.

Theres nothing wrong with domestic courts reviewing government regulations, but outsourcing the responsibility to international tribunals is troubling. In effect, youre giving these arbitrators the power of review over domestic law and regulation, Yackee said. However you spin it, its an infringement on the democratic process. I.S.D.S. advocates insist that companies can sue only to receive compensation, not to roll back regulations, but Johnson said, When you talk to government officials, its clear that there is a chilling effect. After Philip Morris Asia sued Australia, New Zealand delayed similar regulations.

Furthermore, studies suggest that I.S.D.S. has little impact on investment flows, even for developing countries. And for the U.S. its totally superfluous, as we have no trouble convincing foreign investors that their money will be legally protected. Investors, too, can now buy political-risk insurance to protect themselves against the possibility of loss.

I.S.D.S.-style provisions may once have made sense. But theyre now outdated and unnecessary. And including them in trade agreements undermines the broader case for free trade, by making it look like exactly what people feara system designed to put corporate interests above public ones. If the Administration wants these deals to be seen as legitimate, it can start by excising the I.S.D.S. provisions. We no longer send out the gunboats. Lets call back the lawyers, too.