Anthem, one of the nations largest health insurers, wants its members to stop smoking.

It reimburses those who enroll in smoking-cessation programs or who buy products, like nicotine patches, intended to help people quit. It has even offered to arrange sessions with a coach who talks smokers through the process of quitting.

Smoking is an unhealthy habit, the insurer proclaimed in one of its publications. Its a smart business decision to urge your employees toquit smoking.

But Anthems executive vice president, Wayne S. DeVeydt, serves on the board of the U.S. Chamber of Commerce, which is engaged in a worldwide campaign to block antismoking laws. These include taxes on cigarettes in the Philippines, graphic health warnings on cigarette packs in Jamaica and Nepal, a plan to prohibit the display of cigarettes by retailers in Uruguay and restrictions on smoking in public spaces in Moldova.

The chambers global opposition to antismoking measures, reported by The New York Times this week, poses a challenge for many of the members of the organization, particularly hospitals and health insurers. Four executives of leading health care organizations, including Mr. DeVeydt, are members of the chambers board. The other three executives come from the Health Care Service Corporation, an insurer based in Chicago, the Steward Health Care System of Boston and the Indiana University Health system. 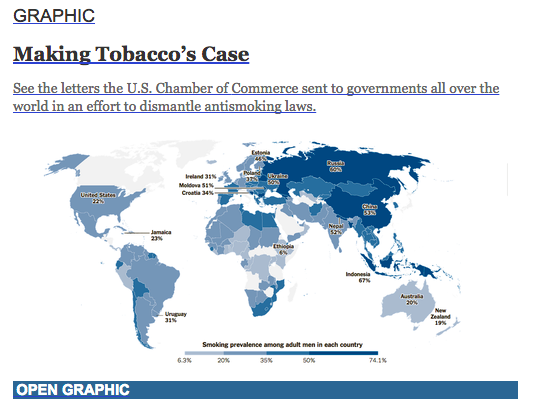 Smoking is one of the leading causes of death, Brooke Thurston, a spokeswoman for Steward, said in a statement, adding, If the chamber is in fact advocating for increased smoking we do not agree with them on this public health issue.

Their silence stands in contrast to opposition to the chambers tobacco lobbying from a surprising source: the public relations firm Burson-Marsteller.

Its pretty obvious that you dont want to be seen doing the bidding of an interest which is no longer legitimate, said David Earnshaw, president of the Brussels office of Burson-Marsteller, a company that long worked for the tobacco industry. He tried unsuccessfully to prevent a major affiliate of the chamber, based in Brussels, from issuing a position paper targeting a European proposal on plain packaging.

In a statement Tuesday, the chamber said, we know that smoking carries obvious health risks, but added that we are concerned that a number of governments have acted in ways that are inconsistent with their international obligations.

The statement said the chamber had raised substantive concerns about the destruction of intellectual property and the dangerous precedent of discrimination against a legal product possibly spreading to other sectors. It added, We make no apology for asking governments to keep their word.

The chamber has not addressed why it has opposed health measures like restricting smoking in public places.

The Times reported this week that the chamber lobbies against antismoking laws in many countries, pits countries against one another on tobacco issues in trade forums, and, in Washington, defends the ability of the tobacco industry to sue under future trade deals.

The chamber, which claims more than three million members, previously encountered friction over its policies. Apple abandoned the chamber in 2009 over its rejection of climate change regulation. The construction giant Skanska left in 2013 after protesting the chambers resistance to green building codes.

Last year, when the branch of the American Chamber of Commerce in Brussels, known as AmCham EU, drafted its paper outlining opposition to plain packaging, the only inkling of dissent came from a footnote.

This position paper does not represent the views of all members of AmCham EU, it said, in an italicized note at the end.

Burson-Marsteller, which has had its share of controversial clients, was an unlikely rebel against the chambers position. The firm developed public relations and marketing campaigns for RJR Reynolds like Project SPA, the introduction of its failed Premier brand of cigarettes in the 1980s. Burson, a member of AmCham EU, also worked extensively for Philip Morris U.S.A., now part of Altria, developing campaigns that included a strategy to beat back criticism of the cigarette makers sponsorship of womens tennis.

But in 2010 the firm renounced tobacco. Last year, Mr. Earnshaw raised objections with AmCham EU about aligning with tobacco interests, especially with many members in the cross hairs of European regulators and lawmakers facing concerns about privacy, the dominance of technology companies based in the United States and negotiations over a trans-Atlantic trade treaty.

I tried to stop AmCham from shooting itself in the foot, Mr. Earnshaw said. Its particularly crazy at a time when there are such big issues that American companies need to be involved in.

AmCham is extremely influential in public affairs, he added. If it starts producing position papers defending big tobacco on plain packaging, its going to make itself look ridiculous.

The chambers E.U. branch proceeded with the position paper, arguing that plain packages unfairly harmed tobacco makers intellectual property and posed a broader threat to trademarks, representing a potential precedent for other sectors and consumer goods or services.

The chambers argument sounded as if it could have been written by the tobacco industry. An unpublished early version of the position paper, which was obtained by The Times, reveals that the rapporteur, or primary author, was Anne-Laure Covin, an executive of Philip Morris International, which is now separate from Philip Morris U.S.A. The company had no comment.

Philip Morris was not the only company involved. The paper came from a committee at the chambers European Union branch run by a TimeWarner executive, Vincent Jamois, whose name and corporate affiliation are on the draft version of the paper, right above Ms. Covins name.

In other forums, TimeWarner has expressed concern about cigarettes; in 2005 the company introduced a Tobacco Depiction Policy that sought to limit the number of times people were shown smoking in movies. The goal was to reduce or eliminate the depiction of smoking and tobacco products/brands in their feature films, unless there is a compelling creative reason for such depictions, the policy said.

TimeWarner even undertook a detailed study of the effectiveness of the policy, finding that total depictions of smoking in its movies fell to 534 in 2013 from 1,346 in 2006.

Other companies and institutions whose executives are listed on the U.S. Chambers board include Pfizer, which markets the smoking-cessation drug Chantix.

Tobacco use is the leading cause of preventable death in the world, Sharon Castillo, a spokeswoman for Pfizer, said in response to questions. But she continued, Our membership of any group comes with the clear understanding that we may not always agree with all the positions of the organization.

Part of the chambers campaign seeks to discredit antismoking efforts by claiming they lack scientific evidence of effectiveness, particularly requirements that cigarettes be sold in plain packages shorn of corporate logos, or that they be covered with graphic health warnings, or sometimes a combination of the two. A letter from the chamber to the prime minister of Jamaica in 2013 was typical, contending that graphic health warnings are not effective in reducing smoking prevalence.

But many studies have found that plain packaging and packages covered with diseased lungs and other disturbing images make smoking less palatable.

Graphic warnings do work, they motivate people to quit smoking, said Seth Noar, an author of an analysis by researchers at the University of North Carolina of 37 tobacco studies.

For health care companies, a prominent role in a group that antismoking advocates see as the tobacco industrys biggest ally can be particularly awkward. Like Anthem, the Health Care Service Corporation encourages members to stop smoking.

One video on its website called Da Couch Potato features an overweight man who smokes, drinks beer and watches the Chicago Bears but wants to get back in shape. A news release highlights that smoking one pack of cigarettes per day can add up to $1,825.00 each year and tobacco use accounts for more than $96 billion a year in medical costs.

John Cannon, HCSCs executive vice president and chief administrative officer, is a member of the chambers board.

Dr. Ralph de la Torre, a cardiac surgeon and the chairman and chief executive of the Steward health system, also is a board member. One of Stewards hospitals advertises a smoking-cessation program by saying, There are a million reasons to quit smoking but it only takes one.

Daniel F. Evans Jr., chief of the Indiana University Health system, is another member of the chambers board. His health system offers a program called Beat Tobacco taught by qualified tobacco educators who understand the struggles and side effects of tobacco cessation.

Lisa Gilbert, who tracks the chamber for Public Citizen, a consumer advocacy group founded by Ralph Nader, said the health companies were conflicted.

Its interesting to think of a company giving money to another organization to lobby while publicly proclaiming the opposite policy position, she said. Such companies either have no idea whats being lobbied on and would be appalled to learn that something is diametrically opposed to what they support, or there is some actual reason to invest in tobacco control publicly but work to keep laws just as they are in private.