Supporters say they appear to be effective. Critics say there are better and safer ways to quit smoking. 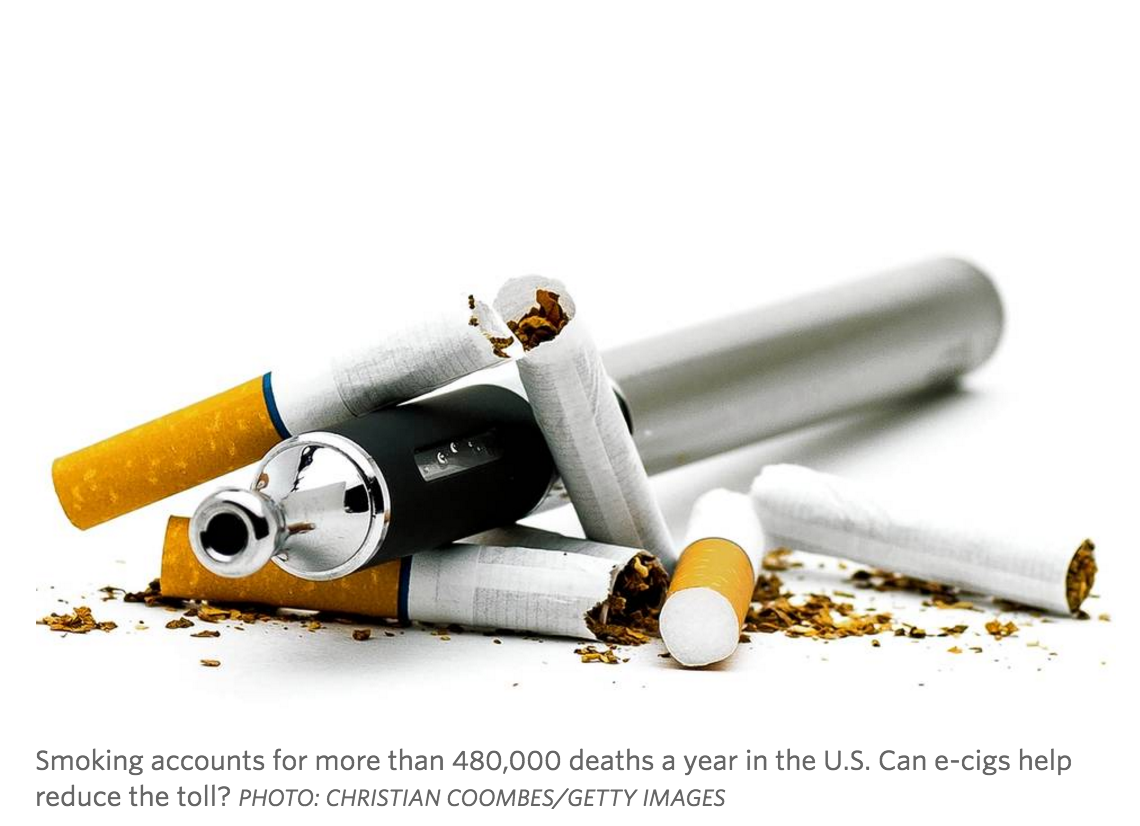 Cigarette smoking has become significantly less popular in the U.S. over the past decade, but it remains a public-health scourge.

Smoking accounts for more than 480,000 deaths every year in this country, or about one of every five deaths, according to the Centers for Disease Control and Prevention. An additional 16 million Americans live with a smoking-related disease, it says. Clearly more needs to be done to get Americans to quit smoking.

Some people say electronic cigarettes can help wean smokers off tobacco, at little risk to their health. For others, both of those assertions are false.

Jed E. Rose, a professor of psychiatry and behavioral sciences and director of the Duke Center for Smoking Cessation at Duke University, makes the case for e-cigarettes as a smoking-cessation tool. Arguing against it is Pamela Ling, a professor of medicine with the Center for Tobacco Control Research and Education at the University of California, San Francisco.

YES: They Appear to Be Effective—and Safer

In evaluating the potential public-health impact of e-cigarettes, we need to bear in mind the staggering toll of death and disease caused by cigarette smoking throughout the world. In this context, we should not discourage promising new approaches that might change this picture.

As with any new potentially therapeutic approach, we must evaluate e-cigarettes based on the information currently available, while recognizing that an exhaustive analysis of all of the potential long-term effects will require many years of study. And the information we have now shows that electronic cigarettes can safely help people quit smoking.

The U.S. Surgeon General and other experts have linked the vast majority of smoking-related disease to the combustion products of smoke, not to the nicotine that is present both in tobacco and in electronic cigarettes.

Nicotine is a powerfully addictive substance, but it is not the cause of cancer, lung disease or vascular disease seen in smokers. While quitting all nicotine-containing products may be an ideal goal, smokers who try to stop on their own have less than a 5% chance of long-term success, and only about a 10% chance with the assistance of a medical provider.

In this setting, the ability to switch from tobacco cigarettes to e-cigarettes that contain nicotine but do not burn offers enormous promise as a means to save lives.

Researchers from highly credible organizations, among them the U.K. Center for Tobacco and Alcohol Studies and the University of Geneva’s Institute of Social and Preventive Medicine, haveconcluded that e-cigarettes are helpful in reducing or eliminating tobacco use. And recently the British government’s drug regulatory authority approved an e-cigarette as a quit-smoking medicine.

This position is also supported by common sense, considering that every other form of nicotine replacement studied to date has been shown to help people stop smoking, including nicotine patches, gum, lozenges, nasal spray and inhalers.

What’s more, compared with those treatments, e-cigarettes can more effectively satisfy a smoker’s craving by delivering nicotine as rapidly as a cigarette, while also satisfying the habitual aspects of smoking. As e-cigarette technology improves, these devices will almost certainly become more-effective tools to aid smokers in breaking their addiction to combustible cigarettes.

Despite expert consensus to that effect, some researchers have focused their attention on exaggerated health concerns. These reports have a sensational quality and often gain wide coverage by the press. For example, some early reports suggested that e-cigarettes produce formaldehyde, a toxic substance found in cigarette smoke. More recent research, however, has shown that under normal operating conditions, e-cigarettes release far less formaldehyde than tobacco cigarettes.

Moreover, because there are numerous carcinogens in cigarette smoke, the formaldehyde component of cigarette smoke has been estimated to raise smokers’ risk of cancer by less than 1 part in 1,000. Thus the overall cancer risk presented by formaldehyde in e-cigarette vapor is likely to be insignificant.

Still, it will take many years to fully establish the long-term safety of electronic cigarettes—during which time millions of tobacco smokers will needlessly die if they are discouraged from using alternatives that are almost certainly far less harmful.

Another report examining population data suggested that e-cigarettes may not be effective for smokers who want to quit. This report gained wide press coverage but was flawed because smokers who turn to e-cigarettes may be a self-selected group that finds it especially difficult to quit smoking.

The gold-standard scientific method for assessing effectiveness is the randomized clinical trial, and two trials to date have shown e-cigarettes can help smokers quit.

Having worked my entire career to develop effective smoking-cessation treatments, I have realized that current approaches are ineffective for the vast majority of smokers. Alternative approaches are urgently needed. The World Health Organization predicts a billion deaths will be attributable to smoking during the 21st century.

Electronic cigarettes have an unparalleled potential to reduce the public-health impact of smoking, by allowing smokers to replace the habit and nicotine of smoking without the toxic effects of combustion.

Dr. Rose is a professor of psychiatry and behavioral sciences and director of the Duke Center for Smoking Cessation at Duke University, and president and CEO of the Rose Research Center. He can be reached at reports@wsj.com.

NO: There Are Better and Safer Ways to Quit Smoking

Doctors should support their patients in every effort to quit smoking. But doctors are also expected to recommend treatments that are safe and effective. Electronic cigarettes are neither.

While there are numerous anecdotes of people using e-cigarettes to help them quit smoking and e-cigarettes have been widely promoted as an effective way to quit, the medical evidence supporting these claims is extremely sparse.

No other randomized clinical trial has compared e-cigarettes with the most effective treatment regimens widely recommended for health-care providers and approved by the Food and Drug Administration (which include the medications bupropion and varenicline, and nicotine replacement therapy through gum, nasal spray, inhaler, lozenge or patch—all of which should be combined with counseling for greatest effect).

Expert opinion is arrayed against e-cigarettes as a quitting aid. The U.S. Preventive Services Task Force, the best independent panel of national experts in prevention and evidence-based medicine, concluded a major review of the medical evidence, finding that there is insufficient evidence to recommend use of e-cigarettes for tobacco cessation. And major medical and health organizations including theWorld Health Organization, the American Medical Association, theAmerican College of Physicians and the American Public Health Association do not recommend using electronic cigarettes for smoking cessation, because the quality of the purported evidence for their effectiveness is poor.

So-called common sense—the idea that e-cigarettes should be effective because other forms of nicotine replacement have been, and more so because they mimic smoking—simply doesn’t stand up when we look at the scientific evidence.

It gets worse. Most people who use e-cigarettes continue to smoke—so now they have simply added e-cigarettes to their tobacco use.

Many people have tried using electronic cigarettes for smoking cessation based on advertising, news reports and word-of-mouth. Studies that have been done of people who used e-cigarettes on their own—as opposed to those who participated in randomized trials—reflect the various devices and ways consumers in the real world are trying to use them to quit smoking.

The rapid evolution of the e-cigarette market further undermines the argument for them.

Most of the studies on electronic cigarettes have been conducted on first-generation products, which are rapidly being replaced by a dizzying array of new products, most of which have not been studied.

While some of these newer devices may deliver nicotine more effectively than first-generation devices—which should make them better quitting tools—they also generate more heat and produce more chemicals and fine particles, which may have adverse health effects.

Even assuming they are still safer than smoking tobacco, asking that e-cigarettes be safer than the world’s most deadly consumer product sets the bar extremely low.

Further skepticism about electronic cigarettes as a way to quit smoking might be prompted by the simple question, who profits?

It is hard to believe that these companies would churn out products that they believe would damage the tobacco market, which is many times bigger than the e-cigarette market.

We have treatments that work for smoking cessation. E-cigarettes are not one of them, and it’s long past time to stop selling them as such.

Dr. Ling is a professor of medicine with the Center for Tobacco Control Research and Education at the University of California, San Francisco. She can be reached at reports@wsj.com.