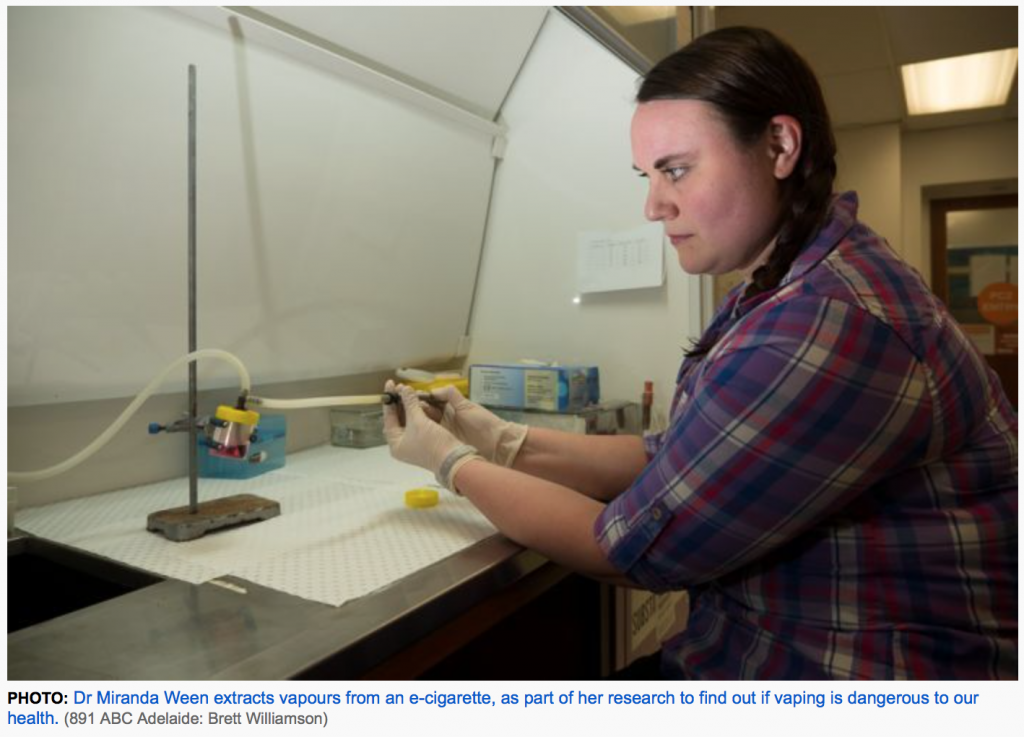 The consequences of inhaling the vapours of an e-cigarette are widely unknown, with research being carried out at the Hanson Institute’s Lung Research Centre showing the habit may not be as harmless as first thought.

Dr Miranda Ween is currently researching what affects inhaling vapours from e-cigarettes may have on the lungs and if vaping makes you more prone to lung infections.

“We are finding that when you vape you are actually reducing your lungs’ abilities to get rid of those cells, similar to cigarette smoke, with exactly the same effect,” Dr Ween said.

Dr Ween’s research into the affects of e-cigarette vapour inhalation has been selected for the Hospital Research Foundation‘s 50th Anniversary Award finalists.

Her research is yet to be published for peer review.

Dr Ween said the industry was still relatively unregulated in Australia and people using e-cigarettes should not automatically assume they are safer than standard cigarettes.

She said, although they were originally set up as nicotine-free options, it was possible to order nicotine and add it to the oils sold locally.

E-cigarettes are operated by superheating an oil or fluid placed into the device and then inhaling the vapours.

“If you talk to a vaping company who runs a store online, they will quite happily import nicotine for you,” she said.

The areas of concern when vaping

Dr Ween said consumers needed to be certain that the oils or liquids they were vaporising did not contain toxic chemicals, and that the e-cigarette’s heating filament was not leaching products.

“Researchers are now finding that the metal wick that is designed to heat up the e-liquid is actually releasing metals into the vapour, so you might have tin or chromium or cadmium going into your lungs,” Dr Ween said.

Due to the e-cigarette delivering a concentrated volume of particles into the lungs, Dr Ween said it was essential for governing bodies to determine and legislate on whether usage of the devices could cause health problems.

“We are finding the vapour itself is increasing the inflammation, rather than the immune response, which is not such a great thing for your body, but we are also finding that it is damaging the immune cells that do the fighting,” Dr Ween said.

“If you have bacteria in your lungs, you are less likely to get rid of it if you are vaping or smoking than if you were not.”

Dr Ween’s research will be presented to the Thoracic Society of Australia/New Zealand and the European Respiratory Society next year for review.

“There is a lot of published work now out there, but not a lot in comparison to cigarette smoke,” Dr Ween said.

She estimated research papers on e-vaping numbered in the hundreds, compared to over 40,000 on the effects of smoking cigarettes.

“At the moment our research is focussing more on ‘is this safe for people who have just started vaping’, and from that point of view we say it is not the best idea,” Dr Ween said.

“For smokers, we are just not sure yet whether it is a step down or not.”