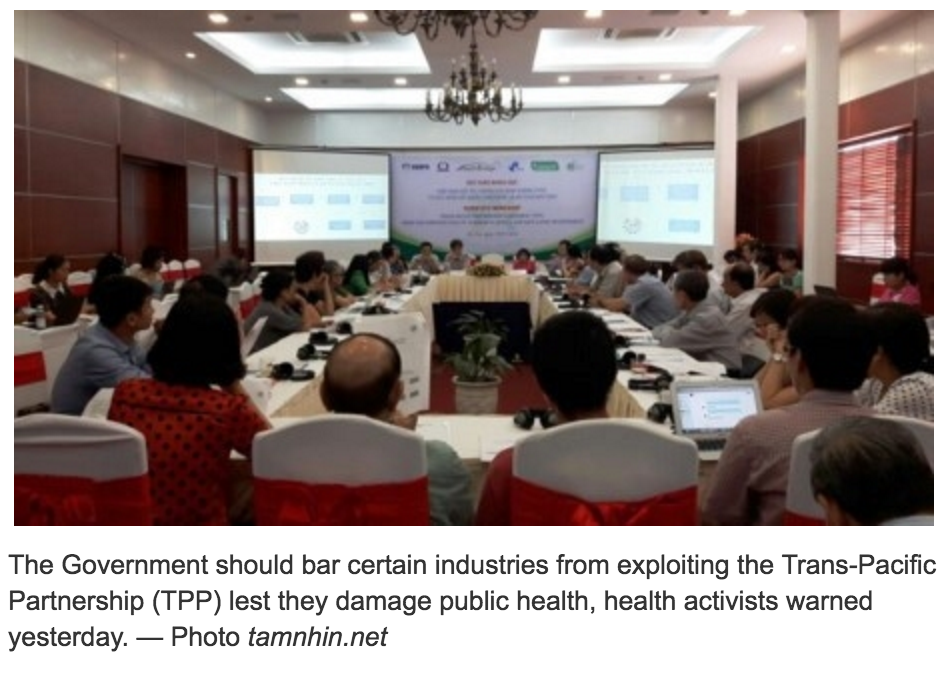 The historic free trade agreement is set to create a freer flow of commerce and win-win trade among its members by establishing a level playing field for all parties and investors. Yet it might challenge the Government to implement measures to protect the public health when some industries, like tobacco and alcohol, take advantage of the TPP to expand their businesses, said Mary Assunta, a senior policy consultant of the Southeast Asia Tobacco Control Alliance.

She addressed the issue at a workshop on the impacts of TPP on public health held in Hà Nội yesterday.

“As far as I am concerned, there are seven chapters in the TPP vulnerable to any challengers of the tobacco industry,” Assunta said.

Those chapters include provisions regarding tariff removal, which could result in lower cigarette prices and a cigarette package without pictorial warnings.

“As a matter of fact, applying a higher tariff/tax on cigarettes and its selling prices is proven to be the most effective strategy to reduce the tobacco demand in the short-term,” Assunta said.

Statistics of the World Health Organisation (WHO) show that Việt Nam is ranked 15th in the world in terms of the number of smokers – about 40 per cent of men smoke. About 72,800 people died of tobacco-caused diseases, equal to a loss of roughly US$78 million every year, according to the Tobacco Atlas.

TPP’s provisions are likely to cause a similar headache for the Government in another health-affected industry in Việt Nam that has shown remarkable growth in the last decade: the alcohol industry.

Member parties of the TPP committed to bring the tariffs of alcoholic beverages, from beer to wine and whiskies, down to zero over a 12-year span.

The TPP enactment is expected to open wide the door for foreign alcoholic beverage manufacturers, especially from the US, into the Vietnamese market, which has already been seeing a strong growth of demand averaging 10 per cent a year.

Efforts to force higher price tags on the beverages to reduce the alcohol consumption are deemed difficult for the Vietnamese Government due to the tariff removal commitment in the TPP, while criticism from other states and alcohol manufacturers might hurt Việt Nam in implementing other measures, like limiting advertisement and stamping health warnings on the products. Those measures are likely to be categorised as technical barriers to trade.

The TPP includes a legal mechanism to settle disputes between foreign investors and their host country, called the ISDS (Investor-State Dispute Settlement). Under the IDSD, foreign investors can legally challenge host state regulations outside that country’s courts.

The ISDS has been used several times since its introduction in international trade agreements, most notably by the tobacco industry.

Many countries like Thailand, Australia, Uruguay and Sri Lanka were sued by tobacco companies when they tried to pass a law on the cigarette packaging to raise public awareness of the dangers of smoking.

The ISDS is also available to claims by alcohol or asbestos producers.

“Asbestos was found to cause cancers since 2001. Any companies that import, distribute and use asbestos should be exempted from the IDSD provision,” said Trần Tuấn from the Advocacy Network on Banning Asbestos Use in Việt Nam (VN-BAN).

Việt Nam is among the top 10 countries in the world using asbestos – a carcinogenic substance as categorised by the International Agency for Research on Cancer (IARC).

The historic TPP was signed on February 4, 2016 in Auckland by 12 states including Việt Nam, Brunei, Malaysia, Singapore, Chile, Peru, Canada, Japan, Australia, New Zealand, Mexico and the United States, after seven years of negotiations. The trade agreement is awaiting ratification by each of its member countries before entering into force. Việt Nam expects to ratify the agreement late this year. — VNS