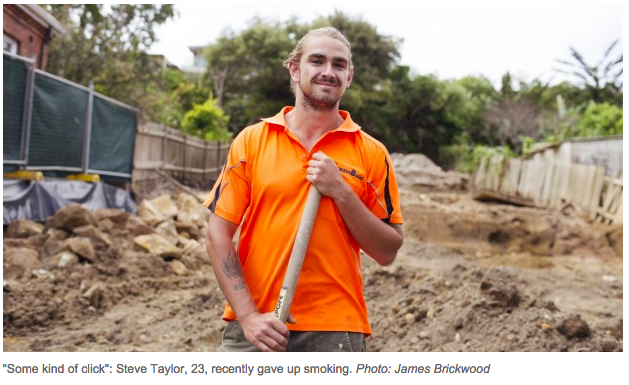 How far away from 45 are you? If you are a smoker, the answer to that question could mean the difference between life and death.

A study of hundreds of thousands of people in NSW has for the first time definitively answered the question of just how much damage smoking is doing to our health, with the data revealing it is likely to kill two-thirds of regular smokers – even higher than previously thought. That means 1.8 million Australian smokers are currently living with an axe over their head.

The study has led public health experts to call for urgent re-investment in Australia’s anti-smoking programs, and a ban on all tobacco company lobbying and PR.

But there is light at the end of the tunnel for smokers – it appears that as long as they quit before they turn 45 they have a good chance of recovering from much of the damage tobacco is doing to their bodies.

Steve Taylor quit four months ago – 10 years after starting smoking at the age of 13.

The carpenter-builder was otherwise fit and healthy, and said he had never worried about the risk of dying. But seeing a friend compete in an Iron Man competition came as a “wake-up call”.

He has not touched a cigarette since that day.

“I think there has to be some kind of click, to allow yourself to change and break the habit and break the cycle,” he said. “It might just be taking on board little snippets of warnings, or just listening to your own body”.

Study leader Emily Banks said the risk of smoking had increased as we saw the effects over long periods – with many people in the study smoking for decades.

“In a smoking epidemic, the risk evolves all the time. In the 1960s, when people started smoking later, they used to say it was like rolling a dice, and there was a one in six chance you would die from it.

“In the ’80s and ’90s it was like flipping a coin. What we are seeing is, we are now only fully realising the impact of smoking,” she said. “The people who smoke now have started at a much younger age and have smoked for many decades.”

The study, published in the journal BMC Medicine, found people who smoked an average of 10 cigarettes a day were more than twice as likely as non-smokers to die prematurely, and the heavier the smoker, the greater the risk of death.

Even those who only smoke five cigarettes a day had a 70 per cent increased chance of dying prematurely.

“Even people who would consider themselves to be light smokers are running a large risk,” said Professor Banks, a researcher at the Australian National University and the 45 and Up scientific director.

She said quitting at any age provided huge health benefits, and the earlier a person did it the better if they wanted to protect themselves against smoking-related illnesses, which could emerge in anyone at any time. But the research also found on average there were huge benefits to quitting before the age of 45.

“For people who quit by the age of 45, and that means before 45, their risks are similar to someone who has never smoked,” she said.

Australian Council on Smoking and Health president Mike Daube said the results were a wake-up call.

“If anything else caused that death toll, it would be seen as a national catastrophe. Australia is a global leader, but 1.8 million deaths – 7.5 per cent of the Australian population – demands a different level of action,” he said.

“This confirms that smoking is still our single most preventable cause of death and disease – and kills even more smokers than we had thought,” he said.

“It also emphasises the risks of even light smoking.”