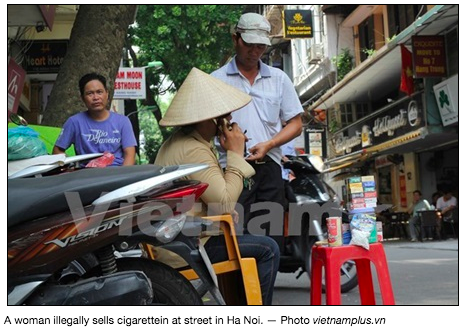 HA NOI (VNS) The World Health Organisation (WHO) has urged Viet Nam to fully implement the WHO Framework Convention on Tobacco Control (FCTC) on World No Tobacco Day on May 31.

Speaking at a conference to review the 10 years of FCTC implementation in Viet Nam today, WHO representative Jeffery Kobza appreciated the country’s strong commitment and remarkable achievements in tobacco control over the past ten years.

Kobza estimated that implementing the tobacco control law fully and doubling the tax on tobacco will help save 16,000 lives from premature deaths each year in Viet Nam.

Kobza noted that Viet Nam has been facing increasing health and economic burden caused by tobacco use that claims more than 40,000 lives a year in the country.

He suggested that Viet Nam should also impose no smoking regulation, especially in restaurants and coffee shops, and raise tobacco taxes to reduce the country’s smoking rate.

Deputy Minister of Health Nguyen Thi Xuyen said that Viet Nam faced difficulties in tobacco control because of its cheap price and a high smoking rate among adult males.

Xuyen noted that tobacco control will need more efforts and collaboration from ministries, sectors, provinces, and cities across the country.

Apart from increasing public awareness of the risks of tobacco use, curbs on smoking at workplaces, schools, and public areas have also been imposed. Around 95 per cent of adults believe that smoking can cause diseases.

In 2012, a tobacco control law was adopted, while a tobacco harm control and prevention national strategy to 2020 was adopted in 2013. According to WHO, tobacco kills nearly six million people each year, of which more than 600,000 are non-smokers dying from breathing second-hand smoke.

In Viet Nam, tobacco claims more than 40,000 lives and healthcare costs and productivity loss due to tobacco use are estimated at more than one billion dollar per year. VNS