There are signs the tobacco industry will fight to the bitter end to make sure nothing gets in the way of their goal of profiting from death and disease. 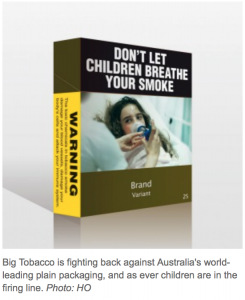 There are three possible explanations for British American Tobacco’s attempts to use Freedom of Information legislation to access Cancer Council research on children’s attitudes to smoking, as reported in The Age last week.

The first is that nobody in the company realised that this would be a PR disaster, confirming yet again Big Tobacco’s reputation as both the world’s most lethal industry and its most ruthless. As such it gives the lie to industry rhetoric about not being interested in children, justifies comment about tobacco companies sinking to new lows, has led politicians to consider amending FOI legislation, and generated a magisterial rebuke from Federal Assistant Health Minister Senator Fiona Nash. PR myopia is always possible in a global tobacco company that claims to be “applying exemplary corporate conduct in our markets” despite selling and promoting a product that kills when used precisely as intended.

The second is that tobacco companies are terrified that Australia’s world-leading plain packaging legislation will spread to other countries. Thus they will go to any lengths in their efforts to undermine it.

If ever a measure passed the tobacco “Scream Test” (the louder the industry scream, the more impact you know a measure will have) it is plain packaging. Plain packaging deprives tobacco companies of their last opportunity to promote cigarettes in ways that children may find attractive. Always intended as a long-term part of the comprehensive approach to reducing smoking, peer-reviewed research is already encouraging about its impacts on both children and adults. Perhaps crucially, it sends out a signal to the entire community that this product is so uniquely harmful that it may only be sold in packaging designed to be repellent.

Small wonder that this has sent Big Tobacco into a tailspin. It has led to litigation here and internationally and triggered advertising and public relations programs, lobbying, and commissioned reports from tobacco-funded groups, industry-friendly think-tanks and bloggers. Tobacco industry lawyers have also generated media speculation that pictures of cirrhotic livers on beer bottles could be the next target. So it is possible that trying to get hold of Cancer Council research on children is further evidence of the industry’s desperation.

But there is a third, darker possibility. The tobacco industry has known for 65 years that its product is lethal. Smoking kills some 6 million people each year, and has been identified by the McKinsey Global Institute as the top global social burden generated by human beings, ahead even of armed violence, war and terrorism. But despite the overwhelming evidence about the galaxy of diseases caused by cigarettes, and despite innumerable exposes about their tactics, tobacco companies have survived and continue to promote their products wherever they can, notably in developing countries.

And yet the tide is turning – too slowly to prevent hundreds of millions of deaths, but it is turning nonetheless. The WHO Framework Convention on Tobacco Control has been signed by 168 countries. Around the world, governments are increasingly taking action that will over time reduce smoking and with it the massive profits that come to the merchants of death. It will all take far too long, but it will happen, and Australia is often held up as an example of the art of the possible.

So it may be that this always ruthless industry has decided to step up yet further its campaigns to oppose and undermine tobacco control and its advocates.

After more than 40 years in tobacco control, here and internationally, my sense is that in recent years the global tobacco industry has become even tougher and more aggressive. The companies are unashamedly taking legal action against governments in developed and developing countries. They have already used FOI against the Federal Health Department. Public relations and lobbying efforts are being ramped up (to tackle one measure recently proposed for the European Union, one tobacco company employed 161 people), and, with stunning effrontery, the industry is trying to improve its image by presenting itself as health conscious. Tobacco companies have reportedly funded lawyers to help remote countries oppose plain packaging in international trade forums. Tobacco control advocates find themselves increasingly under attack from shadowy think-tanks and other internet activists.

Now we have British American Tobacco trying to use FOI legislation to get research on children from the Cancer Council, with the added bonus that this will be a huge distraction for the Council, which must also incur significant legal costs in fighting them off.

It may be a PR blunder and it may be desperation about plain packaging. But it may also be a signal from Big Tobacco that they are in this business for the long haul, the war is about to get even tougher, and nothing and nobody will be allowed to get in the way of profiting from death and disease.

Mike Daube is Professor of Health Policy at Curtin University and president of the Australian Council on Smoking and Health.