Each year, 340 to 680 million kilograms of cigarette butt litter are collected, topping the list of most common types of rubbish during coastal cleanups. These single-use plastics also contain toxic chemicals that leach into the land and marine ecosystems and harm marine life and biodiversity. Tobacco also pollutes the air that we breathe: with over 6.25 trillion cigarettes smoked worldwide every year, including 531 billion sticks in the ASEAN region, tobacco smoke contaminates the air with toxicants, carcinogens, and pollutants.

Tobacco growing and curing contributes 5% of global deforestation through land clearing and tree cutting for firewood. Every year, more than 20 billion trees are cut down for tobacco companies to produce more than six trillion cigarettes. In the ASEAN region, more than 302,746 hectares of arable land are dedicated to tobacco growing – valuable agricultural space which could have been used instead to grow food and other sustainable cash crops. 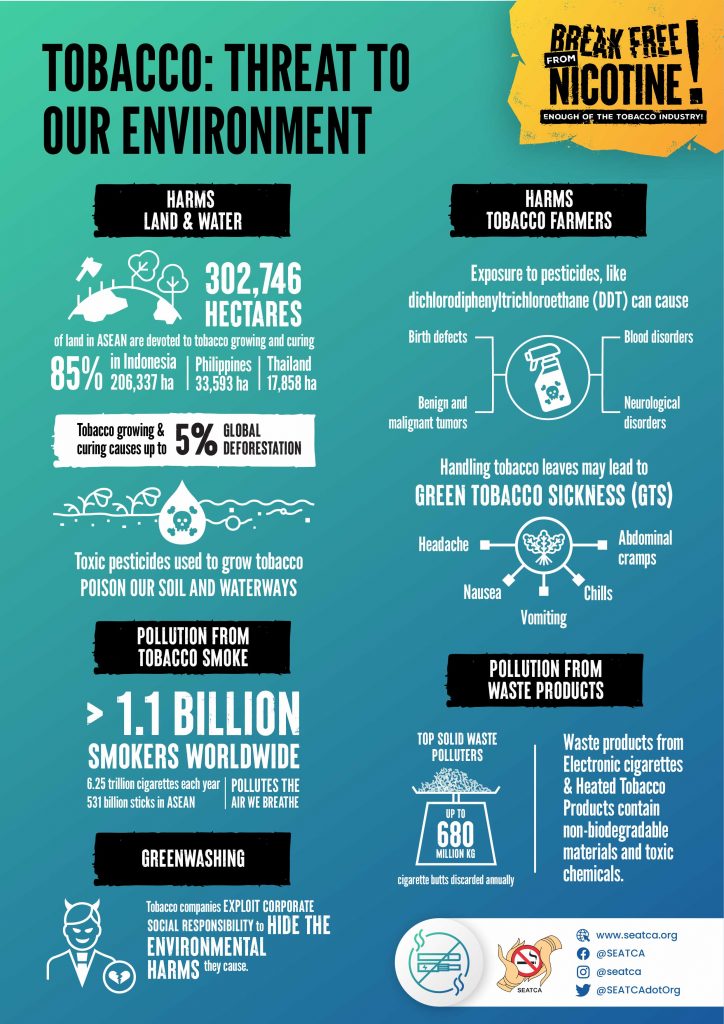 The tobacco industry masks these harmful practices through tokenistic and fake corporate social responsibility (CSR) activities. These CSR activities may take the form of donations to sustainability initiatives or reporting on environmental standards that are self-serving. In reality, the tobacco industry is contradictory to and has no place in sustainable development.

“The WHO Framework Convention on Tobacco Control mandates Parties to protect the environment and human health related to tobacco growing and manufacturing. Governments should implement a comprehensive tobacco control strategy with solutions that make tobacco companies accountable for the damages they inflict on the environment,” explained Dr Ulysses Dorotheo, Executive Director of the Southeast Asia Tobacco Control Alliance.

These solutions can include environmental taxes, on top of the excise tax on tobacco, that may be used to cover the environmental costs of tobacco production, consumption, and clean-up of tobacco waste products.

Governments should also prohibit the tobacco industry from conducting CSR activities, as these sponsorships are used to cover up the harms that it is causing the environment and the health and well-being of people.

SEATCA is a multi-sectoral non-governmental alliance promoting health and saving lives by assisting ASEAN countries to accelerate and effectively implement the tobacco control measures contained in the WHO FCTC. Acknowledged by governments, academic institutions, and civil society for its advancement of tobacco control in Southeast Asia, the WHO bestowed on SEATCA the World No Tobacco Day Award in 2004 and the WHO Director-General’s Special Recognition Award in 2014.