There was a time, not long ago, when smoking was trendy. 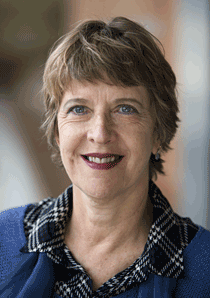 Televisions, billboards and magazines were covered in advertisements glorifying smoking. Concerts and sporting events were places for the tobacco industry to hand out free products and branded promotional items.

And, everyone from your dad to your doctor smoked in all places – cars, elevators, restaurants, houses and even hospitals.

This was the 1980s. The same time I began treating lung cancer patients at a hospital in Brazil and saw first-hand the impact of smoking. During my 6 years there I saw many patients lose their lives, often within 2 years of diagnosis.

I also lost my mother to cancer. Some years later, my father died of the same disease. Both were exposed to smoke. My father was a smoker and my mother spent years breathing in his second-hand smoke.

As a result, I saw the need to prevent cancer by specifically targeting its biggest risk factor – tobacco.

World Cancer Day is a day to recall that tobacco is the single biggest cause of cancer in the world and the leading cause of preventable deaths. Every year, 8.2 million people die from cancer; at least 1.6 million or 20% of these are tobacco-related. In total, more than 6 million people will die this year from tobacco-related diseases including cardiovascular diseases, chronic lung diseases and cancer.

Later this month, we will celebrate the 10th anniversary of the WHO Framework Convention for Tobacco Control (WHO FCTC) – the first intergovernmental treaty established to dramatically change tobacco control worldwide. Entered into force in February 2005, WHO FCTC enacts a set of universal standards stating the dangers of tobacco and limiting its use in all forms worldwide. 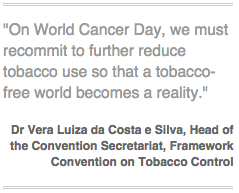 In 10 years, WHO FCTC has become one of the most widely embraced treaties in the history of the United Nations. Its 180 parties cover 90% of the world’s population.

Today, 80% of the countries that ratified the convention have adopted new or strengthened their existing tobacco control legislation. The average price of a packet of cigarettes has increased by almost 150% in the past 5 years and many countries require graphic health warnings to cover at least 75-85% of cigarette packages.

Comprehensive smoking bans covering both indoor workplaces, public places and public transport with no exemptions have been introduced in 48 parties, an almost ten-fold increase since 2005. Outdoor spaces, such as beaches and public parks, have now started to become smoke-free. And, there are many countries who have set high targets to become smoke-free or have less than 5% of the population using tobacco.

The world looks a lot different than it did when I worked at the cancer hospital in the ‘80s.

Smoking is no longer a socially acceptable behaviour and is banned in many places. Public health information on the dangers of smoking is widely available. And, countries are standing together against the advances of the tobacco industry in order to protect the health of their people.

The 10th anniversary of the WHO FCTC shows how coordinated and multisectoral national and international action in the area of tobacco control can de-normalize a risk-factor and move the health agenda forward. It demonstrates that health can indeed persuade other sectors to take action, through taxes, graphic health warnings, legislation and marketing bans to save lives.

But the war on tobacco is not over yet. We still expect 8 million people to be dying each year by 2030 – because they have smoked tobacco or have been exposed to second hand smoke. The use of alternative products such as water pipes, smokeless tobacco and electronic nicotine delivery systems are gaining in popularity and will need to be addressed through tobacco control measures. The illicit tobacco market still counts for 1 in every 10 cigarettes consumed globally.

To prevent this, we must stand together against the tobacco industry. Tobacco companies still spend tens of billions of dollars each year on advertising, promotion and sponsorship of tobacco products. They continuously challenge the regulatory measures governments are taking to protect our children and grandchildren from getting addicted to their products.