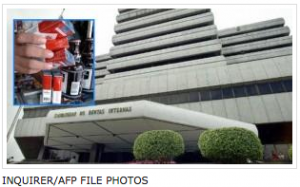 As the volume of sales of “sin products” continued to be steady despite the additional taxes slapped on the goods, Revenue Commissioner Kim S. Jacinto-Henares on Wednesday said that the sin tax rates could be further jacked up without affecting consumption.

Data from the Bureau of Internal Revenue (BIR) presented during a hearing of the Congressional oversight committee on the comprehensive tax reform program (COCCTRP) at the Senate showed that, from January to September, actual incremental revenues from taxes slapped on tobacco and alcohol reached P37.24 billion, higher than the P25.6-billion target set by the agency under Republic Act (RA) No. 10351, or the Sin Tax Reform Act of 2012.

Collections from tobacco products in the first nine months reached P28.79 billion—86.3-percent higher than the target set at P15.45 billion.

The collections from alcohol worth P8.45 billion as of end-September, however, were 16.7-percent below the projected incremented revenue of P10.15 billion for the nine-month period.

As a result of the implementation of RA 10351, total excise tax collections rose to P78.34 billion during the January to September period. Excise revenues without the sin taxes would have stood at only P41.09 billion in the first nine months.

She noted that cigarettes and alcoholic drinks are “nonelastic products” such that the additional taxes did not affect sales.

“We can push the rates higher,” Henares stressed.