A 14-year-old boy has been blinded in one eye after an e-cigarette he was trying at a mall kiosk exploded in his face.

Leor Domatov suffered a cut to his left cornea and severe hand injuries after the device blew up as he was holding it.

Leor – who is too young to be sold e-cigarettes – was offered one by a worker at the Plaza Vapes kiosk at Kings Plaza mall in Brooklyn, New York. 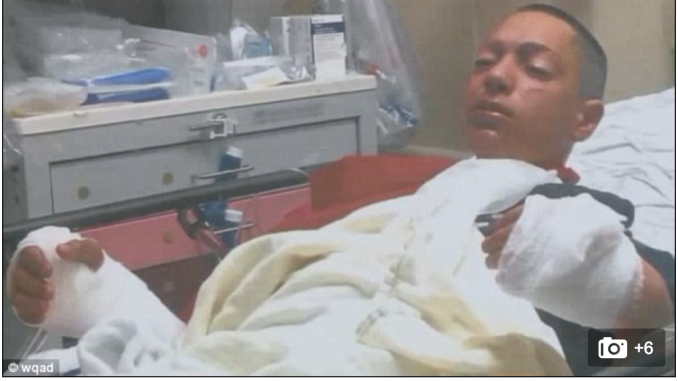 ‘I can’t see anything because I got a cut through my cornea,’ the teenager, who was at the mall with his friends, told Pix11.

‘He gave it to me to hold and when I was holding it, it exploded in my hands and my face,’ Leor said.

Leor was blinded in his left eye, although he may recover his eyesight, and suffered potentially permanent damage to his hands.

It is illegal to sell e-cigarettes to minors in New York. Leor’s father now plans to sue.

The family’s lawyer Marc Freund said: ‘Leor was being marketed at the entrance of the Kings Plaza Mall. A mall that caters to children, and they’re marketing these products, causing all these injuries.’

Mr Freund said Plaza Vapes and the mall should have ensured there were signs up around the kiosk saying that children are not allowed to buy e-cigarettes.

‘The duty falls to Kings Plaza and the kiosk owner to make sure there’s signs in place to warn the children,’ he said.

‘There was not even a single sign advising of the city and state law until after this incident takes place.’

A junior member of staff at Plaza Vapes said she was aware of the incident but her manager did not comment.