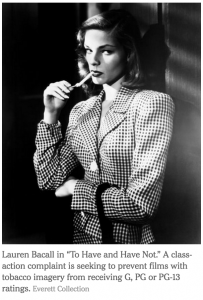 The battle lines are taking shape in what is certain to be a sharp fight — and possibly a long one — over the film ratings system and the way it handles smoking.

The dispute centers on a class-action complaint seeking to prevent films with tobacco imagery from receiving G, PG or PG-13 ratings from the Motion Picture Association of America.

On Monday, the complaint — which was filed last month against the major film studios, theater owners and their ratings system — was assigned to Judge Richard Seeborg, a 2009 Obama appointee who will now oversee the dispute in federal court.

Days earlier, lawyers for the studios and the motion picture association had objected in a filing to the assignment of the case to a magistrate. If nothing else, the move signaled they were paying close attention.

The companies have not answered the complaint, which was filed on Feb. 25 in San Francisco by a parent, Timothy Forsyth.

But it is hard to imagine they will not vigorously pursue the dismissal of a suit that accuses the ratings system of negligence and fraud, and asks the court to, in effect, force an R rating on virtually any movie that portrays tobacco use.

Antismoking activists have long contended that such a move would save lives by reducing the number of young smokers.

But judicial interference might also crack the ratings system wide open, exposing it to similar challenges by those who would like to see tougher ratings for portrayals of gun violence or drug use.

Key decisions are still months away. But the Forsyth suit, currently just a skirmish in the United States District Court for the Northern District of California, has the look of a future battle royale — perhaps the biggest since 1968, when Jack Valenti, then president of the motion picture association, established the voluntary ratings system with an eye toward keeping the courts and lawmakers away.