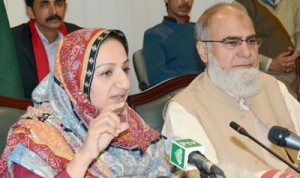 ISLAMABAD: Minister for National Health Services, Regulations and Coordination, Saira Afzal Tarar on Wednesday announced that new pictorial warning will cover 85 percent of cigarette packs on both sides in the country.

Addressing a press conference, the minister said that the tobacco companies would start implementing this decision from March 30 and efforts will be made to apply this decision on all cigarettes stock by May 30 in the country.

She said that the government has also decided to further enhance taxes on tobacco items, adding, a concerned committee has been constituted in this regard with participation from WHO and Federal Board of Revenue aimed at stopping tobacco use.

She said that the ministry will announce national health policy within two months. She also announced that the government will soon announce country’s first drugs policy.

She said that it is a major stride forward in curbing tobacco use as the size of the warning has also been more than doubled from 40 percent to 85 percent.

She said that the matter of introducing the new enhanced pictorial warning was initiated in 2011. The ministry has started process of consultation with the provinces in 2013 to revive the tobacco control programme and strengthen it.

She said that Pakistan has fulfilled it obligation under Article 11 of the Frame Work convention of Tobacco control and become a world leader for the other countries to follow.

Pictorial warning on tobacco packs is the most effective means of communication with tobacco users as according to research, a smoker looks at this picture at an average of 7,000 times in a year.

Moreover, those who intend to initiate smoking are discouraged by the warning where as it encourages those to intend to quit smoking. she added.

Under the new measure, cigarette manufactured in the country, sale in the country and imported into the country will be required to have the new pictorial warning on their packs mandatory by March 30, 2015.

The minister added that any manufactures, importer, distributer or retailer who will violate the new law will be dealt according to law. She expressed the hope that all shareholders including the provincial governments will ensure full implementation of the new measure.