Since the draft Law on Tobacco Control in Cambodian (drafted since 2003) had already gone through its procedural process from Ministry of Health to the Council of Ministers and to the Ministry of Justice and had lately been submitted to the National Assembly and the Senate for approval, the workshop was aimed at convincing the Parliament to pass the draft law as soon as possible. The workshop focus on the importance of having such a comprehensive and effective law for tobacco control and also stated various obstacles in tobacco control, that’s TI interference into policy development, implementation and enforcement. The workshop was organized by the Senate and supported by the Cambodia Movement for Health, Campaign for Tobacco Free Kids (CTFK), with the WHO-Cambodia providing technical support.

The welcoming remarks was done by Dr. Pamela Coffey from CTFK.  She encouraged Cambodia to have an effective pictorial health warning law(she raised example of best practice in large GHW in Thailand) and most importantly she recommended Cambodian government to protect itself from TI interference into tobacco control policy.

SEATCA Director Ms. Bungon Rithiphakdee highlighted the importance of having graphic health warnings.  She also recommended the Cambodian government raise tobacco taxes since tobacco tax in Cambodia is the second lowest among countries in the region. 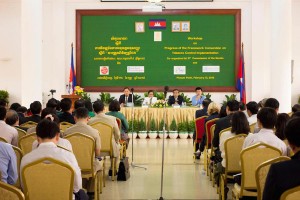 Other speakers were Atty. Keo Sokea on TI and key principles of the Guidelines for implementation of the FCTC article 5.3. “Don’t be fooled by TI,” Dr. Kong presented the Myths (claimed by TI) and Facts about tobacco control which are the main obstacles in tobacco control. Mr. Hok Khieve, Head of Department of Legislation, MOH, presented the contents of the draft law on tobacco control in which there are 13 chapters containing 49 articles focusing on ads ban, health warning, tax policy, SFE, Funding Mechanisms.Dr. Yel Daravuth, National Professional Officer, WHO-Cambodia presented on the tobacco epidemic and the FCTC key articles, while Mr. Chuor Se from the General Department of Taxation presented on how tobacco is taxed in Cambodia.