Beijing residents miffed with smokers defying a ban on lighting up in the city’s public spaces are outing them online. 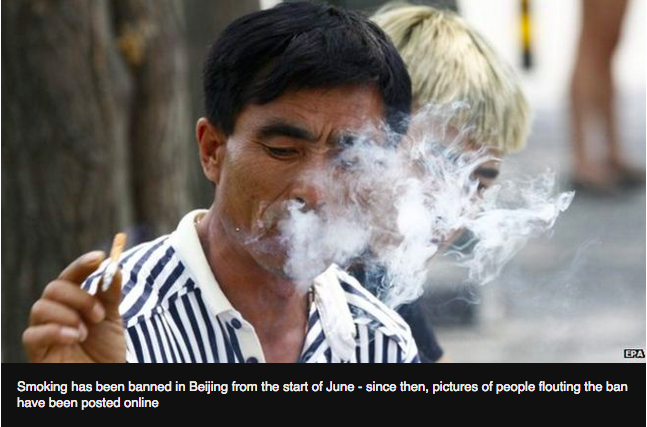 From 1 June, a ban on smoking has been in effect in the Chinese capital’s indoor public spaces including restaurants and office buildings, and on public transport. The ban also applies to open-air spaces near schools, sports venues and historical sites. Individuals found violating the ban will be fined 200 yuan (20; $32) and businesses not enforcing the ban could face much stiffer penalties.

Beijing city authorities have sought to involve the public in their efforts to enforce the ban – a hotline has been set up to report those flouting the rules and the government has even suggested hand gestures that others should use to signal people to stop smoking.

The campaign has also been taken online by the Beijing municipal government with accounts called “Smoke-free Beijing” on the Twitter-like Weibo network and messaging app WeChat. The WeChat account provides information about smoking regulations, videos warning about the ill-effects of cigarettes, tips on how to quit and links to media reports about the ban.

But hundreds of residents are using its message board – “Exposure Table” – to post pictures of smokers allegedly violating the ban. The photographs posted on the board show people smoking on stairwells and in shopping malls – some even show policemen appearing to break the law.

The response to this initiative has been largely favourable online in China. “There is generally a positive sentiment in China towards the ‘Smoke-free Beijing’ noticeboard. People who are posting on it are happy that exists, and uploaders generally make their antipathy towards indoor smokers known, with comments like ‘I’m so sick of this’,” says Kerry Allen, BBC Monitoring’s China analyst.

But a few have asked the people shaming smokers on WeChat to “mind their own business.” For instance, a user commented on the above photo of the man smoking while walking down the street: “Such pointless post. He is so far away from you, how can his smoke be choking you?… Also who said you can’t smoke on the footpath?”

It is not entirely clear what, if anything, has happened to the individuals visibly seen smoking in prohibited areas in the photos, but an report on Chinese national radio said that action will be taken against establishments which are the subject of multiple complaints on WeChat. According to health authorities, Beijing has more than four million smokers – nearly a quarter of the city’s population.