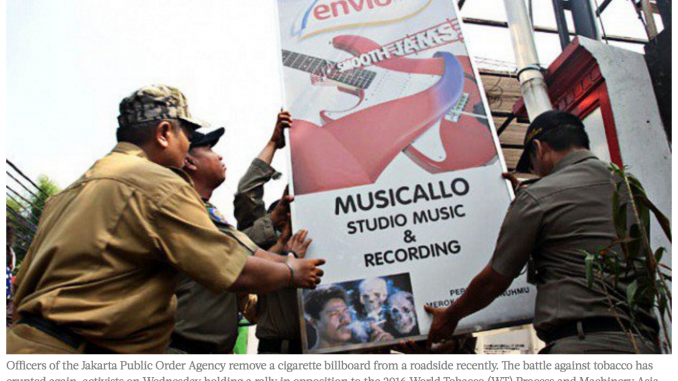 Activists rallied on Wednesday in protest against the 2016 World Tobacco ( WT ) Process and Machinery Asia event at JIExpo, Jakarta, in the wake of the finalization of a controversial tobacco bill that has triggered furious argument between pro- and anti-tobacco campaigners.

According to the Central Jakarta Police, the demonstration, gathering at least 100 people, started at 12.30 p.m. on Wednesday; the organizer of the event agreed to meet eight of them at around 2 pm.

“At the event, machinery to process tobacco and new cigarette products will be displayed in order to expand the grip of the cigarette industry on the country,” said University of Indonesia student executive body ( UI BEM ) head Arya Adiansyah in a press release on Tuesday.

WT Process and Machinery is an international forum for key players in the tobacco industry to showcase tobacco machinery and facilitate discussion on the challenges faced by the industry.

Previously, UI students asked Jakarta Governor Basuki “Ahok” Tjahaja Purnama to cancel the event, which is to last until Thursday. They argued that the event was a way to promote cigarette consumption.

As Ahok ignored their demand, the UI BEM decided to rally at JIExpo, supported by the Indonesian Consumer Foundation ( YLKI ).

According to the National Commission on Tobacco Control ( KNPT ), around 200,000 Indonesians die annually because of smoking-related diseases. However, the House of Representatives legislation body ( Baleg ) said on Monday that the tobacco bill was only awaiting finalization.

He added that the bill would also regulate relations between tobacco farmers and producers of tobacco-related products.

Meanwhile, Agus Sujatno of the YLKI advocacy department said the tobacco bill was a result of cigarette industry lobbying, as there had been many peculiarities in the deliberation process, including a failure to take the Health Ministry’s opposition to the bill into account.

“One of the problems is that the bill would recognize kretek [clove cigarettes] as a cultural legacy, which could eventually increase the production of cigarettes in the country,” Agus said.

On the other hand, Alfa Gumilang, the general secretary of Komunitas Kretek, said on Wednesday that all requirements to finalize the tobacco bill had been completed over the past years.

“Antitobacco campaigners tend to talk about the tobacco bill as if it has been ordered by the industries, but they have never been able to prove that. Kretek is a part of our cultural heritage, an inherent part of our daily lives. The mixing of tobacco and cloves is found only in Indonesia,” Alfa said.

He added that cigarette industries contributed massively in taxes and employed millions of people across the country.

This year, the government has targeted Rp 139.12 trillion ( US$10.29 billion ) in revenues from tobacco products, following a rise in tobacco excise by an average of 11.19 percent as of Jan. 1 this year.