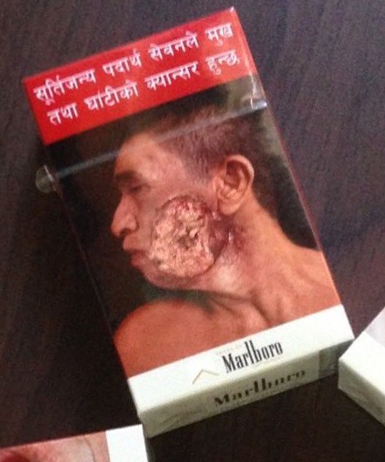 Nepal recently implemented the world’s largest graphic health warnings on tobacco packs, covering 90 percent of the front and back of the pack. Nepal’s new warnings set a global example and show other countries what can be accomplished by prioritizing health and standing up to the tobacco industry.

The warning labels were implemented despite aggressive efforts by the tobacco industry and its allies to stop them. Nepal’s warning label law came under attack by tobacco industry allies including the U.S. Chamber of Commerce, as documented in the report U.S. Chamber of Commerce: Blowing Smoke for Big Tobacco we and our partners released earlier this year.

Research shows that effective warning labels increase knowledge about risks associated with smoking and can influence future decisions about smoking. Large, graphic warnings are most effective at motivating smokers to quit, discouraging non-smokers from starting, and keep ex-smokers from starting again. They can also be recognized by low-literacy audiences and children – two vulnerable population groups.

Globally, at least 77 countries and jurisdictions have graphic health warning requirements, according to a report by the Canadian Cancer Society

. Nepal’s leadership in implementing its new warnings should serve as an example for neighboring countries, including India and Pakistan, that are struggling to implement their health warning laws.

We congratulate Nepal for prioritizing the health of its people, standing up to the tobacco industry and leading the world in taking strong action to reduce tobacco use.