Editor’s note: The first edition of the ASEAN Tobacco Control Atlas was launched to coincide with the conference. Click here to read additional reporting by SEATCA and download the report. Dr Marewa Glover from the University of Auckland Centre for Tobacco Control Research writes here about how e or m health ideas are an area that need more attention, and here about the importance of helping smokers quit to achieve Endgame goals. 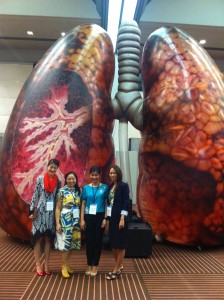 Dr. Judith Mackay immediately followed up with a forward-looking plenary lecture on the tobacco endgame in line with the conference theme “Ending the Tobacco Epidemic – Protecting and Keeping Healthy Lives”, and over the next few days, best practices for measures to reduce tobacco consumption, such as optimal tobacco taxation, cost-effective cessation, and smoke-free policy advocacy, were discussed in plenary sessions, symposia, and poster presentations. Particular recognition was given to Australia for legislating the world’s first plain packaging of tobacco products, to Thailand for standing up to Big Tobacco’s intimidation by litigation for requiring the world’s largest (85%) pictorial health warnings, and to New Zealand for trendsetting a 2025 endgame target.

In contrast, the conference also recognized the varying degrees of tobacco control implementation in individual countries and underscored the need for full and accelerated FCTC implementation across our region in order to slow the tobacco death clock. Indonesia, for example, remains the only Asian country not a party to the FCTC, and conference host, Japan, still has no national law to protect the public from secondhand smoke. In this regard, delegates and speakers also shared experiences relating to the increasing incidence and overtness of tobacco industry interference in public policy (e.g. through their so-called Corporate Social Responsibility (CSR) activities, litigation against effective tobacco regulation, and stakeholder engagement in international trade policies) and called on governments to immediately and fully implement FCTC Article 5.3 and its guidelines, to ban CSR activities by the industry, and to explicitly exclude tobacco products from international, regional, and bilateral trade and investment agreements, such as the Trans-Pacific Partnership agreement currently being negotiated, noting that, except for the US, all TPP negotiators are Parties to the FCTC.

The 10th APACT further recognized the importance of the youth as future leaders who must be meaningfully engaged to realize the tobacco endgame in the Asia Pacific region, because just as in 1989, continuing collaboration is needed to overcome Big Tobacco, which relentlessly targets young people of Asia for its profits.

The next APACT Conference will be in 2016 in Qingdao, China.