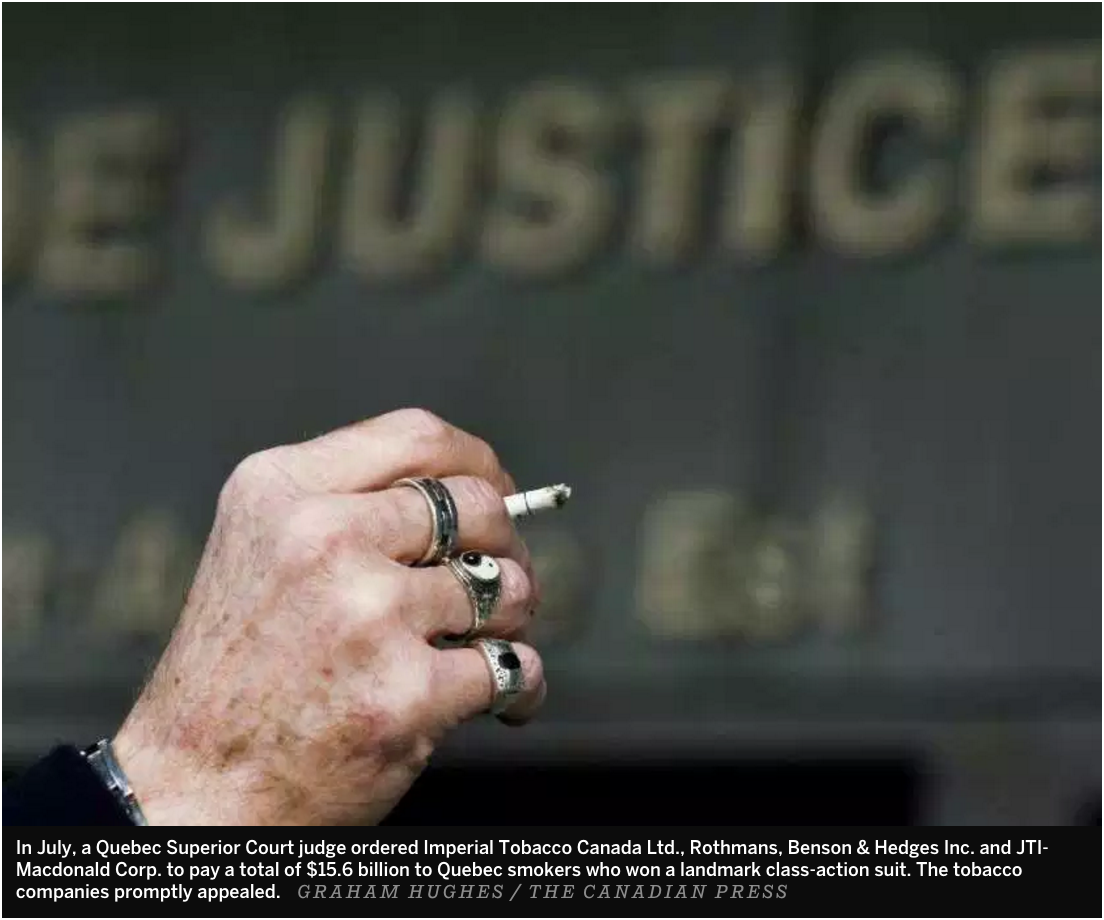 Two of Canada’s largest tobacco companies must pay almost $1 billion in security to ensure that money is available to pay victims who have been involved in a 17-year legal battle for compensation, the Quebec Court of Appeal ruled on Tuesday.

The court said it wants to make sure that compensation can be paid quickly if the tobacco firms eventually lose their appeal of a landmark decision ordering them to pay $15.6 billion to Quebec smokers who became ill or couldn’t stop smoking.

“This is a major win for victims and a significant loss for tobacco companies,” said Rob Cunningham, a senior policy analyst with the Canadian Cancer Society. “This is the first time in the 17 years of this case that tobacco companies will have to make a financial payment.”

Imperial Tobacco released a statement Tuesday night saying it is disappointed in the ruling and doesn’t believe that the company “should have to secure payment before all appeals are exhausted and a final judgment is rendered.”

It reiterated its opposition to the $15.6 billion class-action judgment saying “it is unjustified to hold legal manufacturers responsible for the personal choices of adult consumers and it will continue to defend that position as its appeals proceed before the courts.”

In July, a Quebec Superior Court judge ordered Imperial Tobacco Canada Ltd., Rothmans, Benson & Hedges Inc. and JTI-Macdonald Corp. to pay a total of $15.6 billion to Quebec smokers who won a landmark class-action suit. In the ruling, the judge ordered the three firms to pay an initial $1.1 billion payment in compensation to the victims.

However, the tobacco firms appealed the decision saying they would have trouble recouping the money if they eventually won the case on appeal. After a Quebec Court of Appeal judge ruled in their favour, the victims asked the court for a motion forcing two of the companies — Imperial Tobacco and Rothmans, Benson & Hedges to provide funds in the form of a security with the court. The motion against JTI-Macdonald was withdrawn after one of the lawyers became ill.

The tobacco firms can seek permission from the Supreme Court of Canada to appeal Tuesday’s ruling.