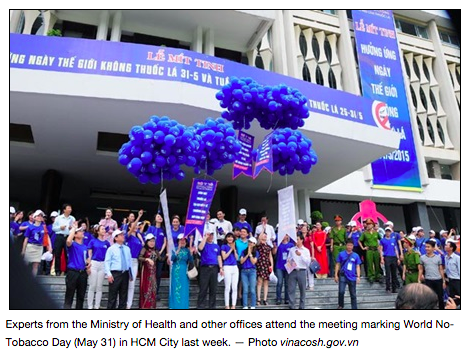 HA NOI (VNS) Viet Nam has made significant progress in preventing and controlling the harmful effects of cigarettes, officials say.

Speaking at a meeting marking World No-Tobacco Day (May 31) last week, he said these localities had included the prevention of cigarette impacts in their annual plans. Smoking had been banned in all offices.

The Viet Nam General Confederation of Labour has also banned smoking at many work places.

Khue said that inspections by VINACOSH showed many provinces and cities had put up “no-smoking” signs at bus and railway stations, schools and hospitals.

He said more signs and information should be provided in public places, including warnings that people could be prosecuted for smoking at schools and hospitals.

As many as 90 per cent of students said they intended to give up smoking and 70 per cent said they’d given up smoking successfully in 2014.

Khue said that this year, VINACOSH would step up awareness campaigns in poor remote and ethnic areas. Localities would receive financial and technological support to train health workers as well as social workers.

A Health Ministry study also found that many smokers wanted guidance in kicking their habit. The ministry plans to set up a hotline to help them.

The hotline would be maintained for a year on a pilot basis, and expanded if found to be effective, Khue said. VNS