PETALING JAYA: The new price of cigarettes announced by British American Tobacco (BAT) on Tuesday will cost you the same as 6kg of rice or four servings of nasi lemak.

In terms of basic household items, a packet of cigarettes is equivalent to 6kg of rice or 32 eggs.

A survey of the prices at local supermarkets like Tesco and Aeon revealed that RM17 is enough to purchase 21¼ packets of Maggi instant noodles, while the price of a whole chicken is under RM15. 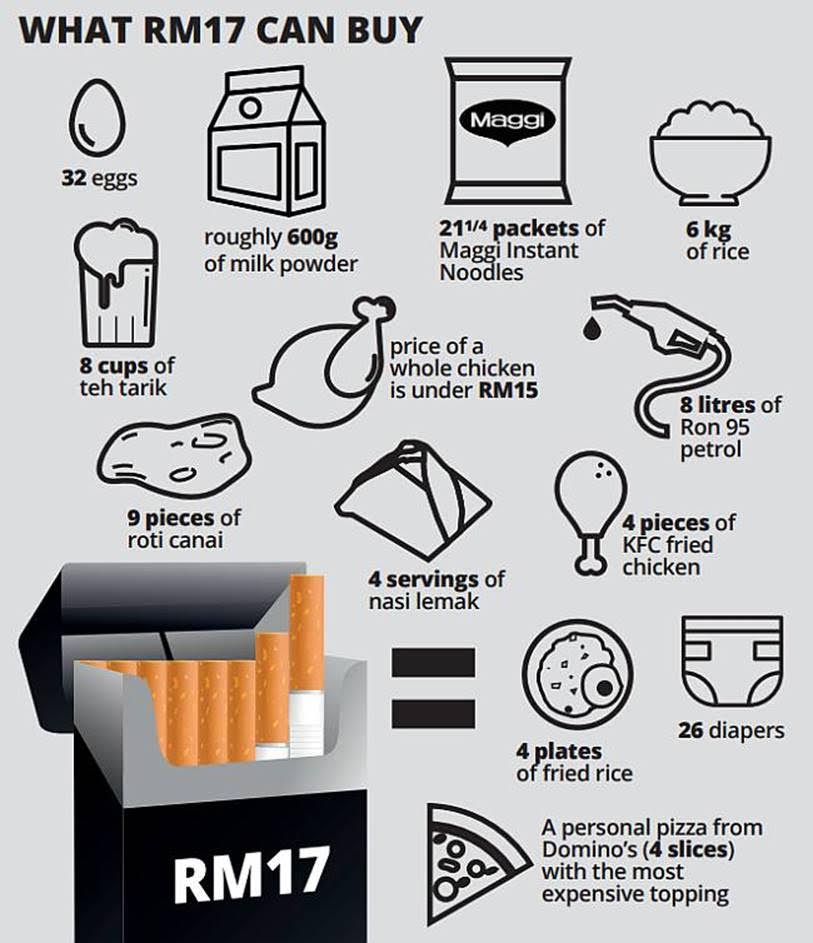 What a pack of cigarettes can buy

As far as meals are concerned, RM17 will be able to get you nine pieces of roti canai or eight cups of teh tarik at many Mamak restaurants around Kuala Lumpur. The same amount of money is also enough to buy four packets of nasi lemak or fried rice around the city.

A personal pizza from Dominos with the most expensive topping available will also set you back approximately the same amount of money, as will four pieces of KFC fried chicken.

A budget of RM17 will get you a little more than 8 litres of Ron 95 petrol, which approximately allows for some 140km of travel distance.

Meanwhile, the price of the toll between Sungai Besi (KL) and Ayer Keroh (Malacca) on the North-South Expressway (115km) is RM16.50.

Some parents might also be interested in knowing that a packet of cigarette will cost you the same as buying 26 pieces of diapers or roughly 600grams of milk powder.

BAT in a statement on Tuesday said that the increase in price was implemented after having taken into consideration the sum mandated by the excise increase and its impact on GST as well as inflationary cost pressures.

The company also said that the massive increase in price would result in more illegal cigarettes flooding the market.

Relate Article: Cigarette prices to go up tomorrow, some as high as RM18 per pack