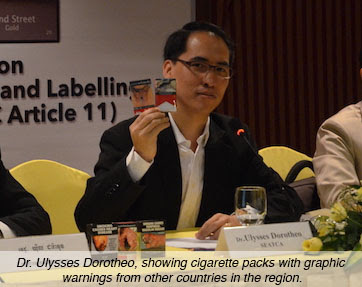 To mark this year’s World No Tobacco Day celebration (31 May), the Southeast Asia Tobacco Control Alliance (SEATCA) released a report recognizing both achievements and gaps in the tobacco packaging and labelling practices in ASEAN countries.

According to the “SEATCA Tobacco Packaging and Labelling Index”, released through a press conference in Phnom Penh, Cambodia on 26 May, while all 10 countries in Southeast Asia had legislated pictorial health warnings (PHW) labels on tobacco packages, only four countries require warnings whose sizes are considered international best practice (at least 75).

SEATCA’s FCTC Program Director, Dr. Ulysses Dorotheo said that ASEAN countries should implement even bigger health warnings, ideally more than 85 percent, as well as plain or standardized tobacco packaging, to increase the effectiveness of health warnings messages. Packaging and labelling of tobacco products need to be strengthened to fully conform to the WHO Framework Convention on Tobacco Control (FCTC) Article 11 Guidelines.

The WHO FCTC Article 11 Guidelines recommend that health warnings be as large as possible and include pictures to effectively communicate health harms of tobacco use, in combination with plain packaging, which enhances visibility of the PHWs and reduces the appeal of tobacco products. As of 20 May 2016, Ireland, UK, and France have enforced plain packaging, joining Australia, which introduced plain packs in 2012.