Tobacco companies and rogue vendors face fines and even prison under a proposed tobacco control bill, labelled “comprehensive” by a health expert and “concerning” by a cigarette company. 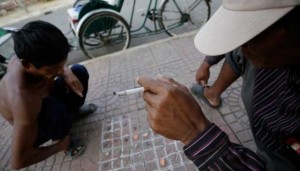 With 10,000 people dying annually from smoking-related illnesses in Cambodia – which was tagged as a “growth market” by Britain’s Imperial Tobacco – the National Assembly will discuss the sweeping changes to tobacco regulation after it resumes in April.

The draft law on tobacco control, a copy of which was obtained by the Post, proposes reinforcing and extending bans on the promotion, advertising and sale of tobacco products, including banning cigarette sales at education facilities, sport clubs, children’s parks, religious and historical sites, museums and gas stations.

The 49-article law, already approved by the Council of Ministers, would mandate pictorial warnings covering at least 50 per cent of cigarette packaging, forbid the use of “misleading” terms such as “light” and “mild”, prohibit cigarette companies from sponsoring events and lay legislative framework for tax increases and bans on smoking in workplaces and public spaces.

It also proposes establishing a “tobacco control committee”, chaired by the minister of health, to lead the fight against smoking and rogue operators via a brigade of trained “tobacco officers”.

Importantly, says Yel Daravuth, of the World Health Organization’s Tobacco Free Initiative, the “comprehensive” law’s restrictions are backed with punishments, which range from $250 to $10,000 in fines and between one day and six months of jail time for specific offences.

“This will be the first time they’ve included punishments for violations,” he said. “If they risk fines and jail, maybe people might be worried.”

Cambodian Movement for Health’s Mom Kong said the most common violations of current advertising restrictions, imposed by sub-decree, were at the point of sale or involved promotional girls at clubs.
According to statistics, cited by Daravuth, about 2 million people in Cambodia smoke.

He said although the prevalence of smoking among adult males dropped from 49 per cent to 42 per cent between 2006 and 2011, the number of smokers remained steady because of population growth.

In total, Cambodia’s cigarette market was worth $123 million in 2013, according to the Southeast Asia Tobacco Control Alliance (SEATCA), with British American Tobacco (BAT) capturing 68 per cent.

BAT spokeswoman Anna Vickerstaff said the company was “extremely concerned” about the draft law’s impact on the industry and had sent a position paper to the government.

She said the proposal to expand warning labels to more than 50 per cent would increase illegal cigarette consumption, damaging the country’s legitimate industry, including small traders and farmers.

Meanwhile, Imperial Tobacco last year increased its profit in Cambodia, which it identified as a growth market in its recently-released 2014 annual report.

It also suggests helping tobacco farmers switch crops and limiting the amount of cigarettes, cigars and tobacco that can be brought into Cambodia.

According to SEATCA, cigarette sales in Cambodia will increase from 7 billion “sticks” last year to about 8 billion in 2018. SEATCA’s Joy Alampay said Cambodia’s next generation was being targeted by tobacco companies.

She said the country faced a crisis unless it reined in smoking, which was fuelled largely by cheap cigarettes, with all the country’s top five brands selling for less than $0.40.

The government should ban packs of less than 20 cigarettes and increase taxes – currently about 28 per cent for foreign brands and 22 per cent for local – above 65 per cent, she said.

One person might be on board. In September, Prime Minister Hun Sen said he had given up smoking after 10 failed attempts over 14 years.